Ladakh, India -- Lukhil Monastery in Ladakh region has continued to maintain its ancient practices of Buddhist culture to this date. 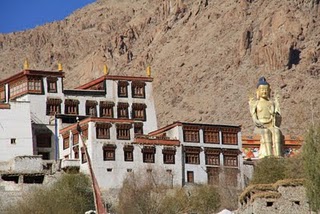 The ancient rituals of the three basic Pratimoksha or, personal liberation disciplines, which are the basic Buddhist teachings, are observed at the Lukhil Monastery in Jammu and Kashmir region, even today.

Founded in the later half of the 11th century, it belongs to the Yellow Hat Sect, founded by Tsongkhapa; a famous teacher of Tibetan Buddhism whose activities led to the formation of the Gelukpa School.

The monastery consists of a number of shrines inside its complex. Presently, it serves not just as a residence of approximately 120 Buddhist monks but also as a school, where there are almost 30 students.

"King Lhachen Gyalpo, the 5th King of Ladakh, converted his palace into monastery in the 11th century. In the 15th century, Lama Nawang Chosje a famous pupil of Tsongkhapa (founder of Gelugpa order) converted the lamas to reformed doctrines of the Gelugpa order, and thus founded the monastery afresh as a Gelugpa establishment," says Thupstan Stantar, Head Monk of Lukhil Monastery.

It is believed that the monastery has been served by the succeeding reincarnations of Naris Rinpoche.

The two Dukhangs, or assembly halls, contain numerous statues of Bodhisattva, Amitabha (Buddha of the West), Sakyamuni (the Historical Buddha), Maitreya (the Future Buddha or Buddha of Compassion) and Tsongkhapa (Founder of the yellow-hat sect).

The main image in one of the Dukhangs is that of Avalokiteshvara, a Bodhisattva who embodies the compassion of all Buddhas, who is represented with 1,000 arms and 11 heads.

Lobzang Tharchin, a monk at Lukhil Monastery, said: "The wall painting you have seen out here are not that much old, it may be not more than 30 years old, and the monastery has two main prayer halls where all the monks of the monastery gather during the annual ritual prayers twice a year."

Every year the monastery serves as the venue of Dosmoche, one of the most popular fairs and festivals of Leh. During the event, sacred dances are also performed at the monastery.

This event takes place from 27th day to 29th day of the 12th month of the Tibetan calendar, which often corresponds with the last week of February.