New Delhi, India -- Nalanda University will be revived but the Dalai Lama will have no association with the project to resurrect the ancient seat of Buddhist learning, an omission aimed at respecting China’s sensibilities. 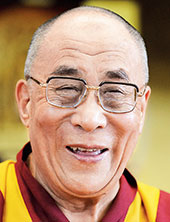 The cabinet today decided to introduce a bill in Parliament’s monsoon session to revive the university under an international initiative spearheaded by the East Asia Summit, a bloc of which India is a member along with China and 14 other nations.

The university is likely to start by the end of this year and Buddhist teachings will be an integral part of its curriculum.

The followers of the Dalai Lama — seen as one of the greatest exponents of Buddhism’s Nalanda tradition — appear to have taken the omission in their stride. They say India’s decision is ironical, but understandable, considering New Delhi’s geopolitical compulsions. “That the university is being revived with support from Buddhist countries is more important than His Holiness being part of the project,” said a long-time disciple.

It was the Tibetan Buddhists, like the Dalai Lama, who kept the “Nalanda tradition” and the teachings of Buddhism’s mahayana sect alive after the burning of the university in the 12th century by invaders.

Although the Dalai Lama will have no role, the revival plan will be spearheaded by a fellow Nobel laureate: Amartya Sen. The economist from Bengal heads the Nalanda Mentor Group, which has held meetings across East Asia, including in Singapore and China, to receive proposals for the university’s revival.

The mentor group, which will draft the regulations next month, will be the university’s interim governing body till the member-countries of the East Asia Summit nominate board members. The President will be the visitor. Gopa Sabharwal of Delhi’s Lady Sri Ram College is tipped to be its first rector.

The international university will be an autonomous institution with the Nalanda seal — kept in a museum in Bihar’s Nalanda — as its emblem.

The revival is being done through an inter-governmental agreement between the member-countries of the East Asia Summit. India has decided to put in Rs 1,005 crore. The Planning Commission will contribute Rs 50 crore till the time the university becomes self-sustainable. Countries of the grouping will make voluntary contributions, though the university will also generate funds through public-private partnerships.

“A project office has been leased out in New Delhi for the proposed university. This office will become functional after the bill is enacted in Parliament,” information and broadcasting minister Ambika Soni said after today’s cabinet meeting.

The Bihar government has already acquired about 500 acres in Rajgir, in the vicinity of the original university site.

Another 500 acres are to be taken over. “The revival of the university will also lead to greater interest in the Buddhist circuits in India, benefiting the tourism industry substantially,” said Soni.