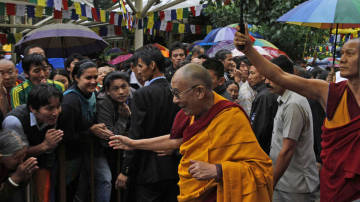 The Centre recently gave a nod for the trip but asked him to exercise restraint in making "observations about China" so that Sino-Indian relations are not affected.

The Dalai Lama will also visit a Buddhist monastery located at an altitude of 10,315 feet and other monasteries in Ladakh's Nubra valley.

"The Dalai Lama will stay at Nubra valley in Kargil for a week from July 21 where he will bless his followers and attend religious functions at different monasteries," Tenzin Taklha, joint secretary at the Dalai Lama's office, said.

The trip will be the Dalai Lama's second visit to Jammu and Kashmir in less than a month. The Tibetan spiritual head had visited Gulabgarh, the only Buddhist dominated town in the Jammu region, earlier this month.

He will also visit the Khardung La (18,380 feet), one of the highest motorable roads in the world.