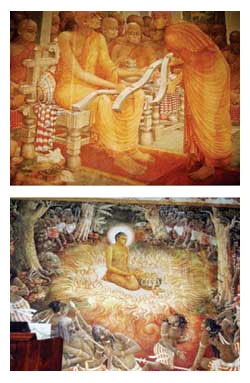 "Beyond commemorating the 260th anniversary of the establishment of Siam Nikaya [Siam-Lanka Wongse] in Sri Lanka, the exhibition reveals the history between two nations that have aided each other and created.a long-lasting relationship through a common religion," Prime Minister's Office Minister Santi Prompat said at the opening ceremony.

As Thailand still mourns the passing of the Supreme Patriarch and the state of Buddhism is reflected on by the public, the story of Phra Upali's epic voyage across the Indian Ocean reminds us of the social and spiritual turbulence experienced by the religion at a crucial point in history.

In the mid-18th century, Buddhism in Ceylon faced the threat of extinction due to influences of Western powers and religion. Despite having been the source of Lanka Wongse Buddhism, which had spread all over Southeast Asia, Ceylon had lost all its ordained monks. In an effort to revive the philosophy that had been _ and continues to be _ the backbone of society, King Sri Vijaya Rajasinha, and his successor, King Kirti Sri Rajasinha, with the persistent urging by novice Saranankara, requested sangha from Siam to ordain those in Ceylon.

A photo display titled ''Sri Lanka-Thailand: Striking Resemblance'' by Fotounited at the ''Origin Of Siam-Lanka Wongse'' exhibition at Musuem Siam

"Sea travel was extremely difficult then. Ceylon had to send three envoys, costing countless lives, before Upali was ready to travel to there. This effort and commitment touched the hearts of the Ceylonese. There's even a saying that Sri Lankans wouldn't be Buddhists today if Phra Upali hadn't completed his expedition," Poldej Worachat, ex-Thai ambassador to Sri Lanka, said of the challenging collaboration between the two nations.

A room within the exhibition is dedicated to the dramatisation of the death-defying voyage, lit only by projections of the stormy sea, drowned in the soundtrack of crashing waves.

Visitors stand on a slanted makeshift deck, reliving the monk's unyielding will despite the tempestuous storm. The sea was treacherous, but the reason for travel much fiercer and staunch. The first diplomatic envoy from Siam had run aground in Nakhon Si Thammarat, the vessel wrecked. But abandoning the mission was not an option. Phra Upali was armed with Buddhist scriptures, tributary gifts and indestructible faith. He was to lead the Buddhist renaissance in Ceylon.

Within his three years in Ceylon, Phra Upali settled in Kandy and established the Siam Nikaya, or Siam Wongse, denomination of Theravada Buddhism, performing upasampada (higher ordinations) for as many as 700 monks and 3,000 novices. The first ritual of ordinations was done during the full moon in July 1753. Phra Upali and his convoy also instructed the monks in the elements involved in performing an ordination knowing that growing the sangha would lead to stability for Buddhism.

Phra Upali reintroduced the study of the Pali language as well as many other monastic practices such as Buddhist lent, or Khao Phansa. The Buddhist revival, thus, contributed to a literary resurgence and a dissemination of Buddha's teachings.

''Origin of Siam-Langka Wongse'' underscores the similarity in religious practices between Thailand and Sri Lanka, including preparing new bhikkhu robes in one day.

''Not many Thai people know of Phra Upali's efforts in bridging our two countries. The exhibition serves to inform the public of the starting point of a strong relationship bound by the Buddhist faith,''.Mr Poldej said.

Complementing the main exhibition is a photo display lining the corridor, ''Sri Lanka-Thailand: Striking Resemblance'', by the Fotounited group. The eight photographers spent five days in Sri Lanka capturing an overview of the country whose religious institutions and practices have shaped today's society.

The photographs present historical architecture and religious figures and practices, many mirroring Buddhism in Thailand. A picture of a robe-offering ceremony at the Great Stupa of Nakhon Si Thammarat on Makha Bucha day is slipped in next to a robe-offering ceremony in Sri Lanka _ the differences only distinguishable if one looks at the plaque beneath each photograph.

The photos serve as a visual counterpoint to the rich and information-heavy part of the exhibition. ''They are supposed to present the first impressions of the religious landscape in Sri Lanka _ what we saw,'' said photographer and coordinator Chiranan Pitpreecha. ''The plaques captioning the photos are purposely small. Anyone who's more interested must be compelled to take a closer look.''

These photographs render the history of Buddhist art and aesthetics. A photo of an elaborately carved semi-circular stone slab before an entrance presents a relic of Sinhalese architecture from ancient times.

''The stone the man is walking on is the moonstone. It depicts the circle of samsara _ the circle of life,'' Chiranan pointed out. ''When I heard the explanation, I was almost brought to tears. It really conveys that the Buddhist philosophy has become such a way of life. People live with philosophy.''

In the photo, a man physically walks over this circle of life, barefoot, entering the Buddhist temple through the centre, a lotus _ the final stage of nirvana.

Several other photographs were taken at Sigiriya Lion Rock, a 180m-tall granite peak with steep slopes emerging from the surrounding jungle. The summit houses the impregnable palace of a king who gained his position on the throne by killing his own father and dispossessing his brother in the 5th century AD. A photo captures a fresco in a rock cave, depicting 21 unidentified women, ''The Maidens of the Clouds'', speculated to be divine figures.

'Just imagine the people painting these frescos on the ceiling of the cave. There's just so much art history imbedded in all these works we photographed,'' Chiranan said, in awe of the deep-seated visual culture. The exhibition presents the restoration of a faith 260 years ago. The images capture the meditative silence, the calmness of Buddhist life in Sri Lanka, where today about 70% of the population of 20 million is Buddhist.

Even though religious tension between some nationalist Buddhists and minority Muslims in Sri Lanka may speak of a more complex relationship between different faiths in the country, the exhibition perhaps reminds us of the underlying message of peace that Lord Buddha propagated.

Phra Upali's accomplishments are preserved, in practices and in artefacts, in worship and in devotion. He died of an ear infection in Kandy three years after his arrival, but not before reviving the faith of a nation.

''Origin Of Siam-Lanka Wongse: Upali's Pilgrimage, 260 Years Of Siamese Heritage In Sri Lanka'' is on display until Dec 8, from 10am-6pm, at the temporary exhibition room, Museum Siam.