Colombo, Sri Lanka -- The proposed Theravada Bhikku Dialogue Act which will enable every Bhikku to act in compliance with the provisions of the registered Chapter or Kathikawatha, was presented to parliament recently. 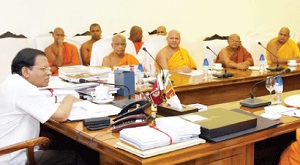 According to the Bill presented by Mass Media and Parliamentary Reforms Minister and Chief Government Whip Gayantha Karunathilake, it provides provisions for the formulation and registration of the Kathikawatha (Dialogue) in relation to Nikaya (chapters) of the Theravadi Bhikkus in Sri Lanka.

The Bill provides for every Bhikku to act in compliance with the provisions of the registered Chapter or Kathikawatha. However at present, this Act has become one of the most controversial legislations in the recent parliament history.

Even the opinion of the Maha Sangha in this regard appears to be divided. While some of the monks have justified the enactment of such a law, some have heavily objected to this bill claiming that it would diminish Budhists monks’ trights and freedoms.

Regulations on Bhikku discipline were first introduced by the Lord Buddha for the betterment of the Buddha Sasana and the monks themselves. Every time such rules were imposed, it was due to some form of just cause. At the time the Lord Buddha passed away into Parinibbana (Expiration), he advised the Bhikkus to amend minor disciplinary rules according to necessity. However, after the first Buddhist Council (Sangayana) it was decided by the Maha Sangha  that there would not be a necessity to change any disciplinary rule. Hence the Vinaya Pitakaya (The guide book on discipline) was created, and up to date, the disciplinary issues of the Maha Sangha (The entire umber of monks who folow Buddhsit teaching) were mainly decided according to this book. However, when observing the current behaviour of the Maha Sangha, it has become problematic as to whether the Bhikkus are actually following these rules.

In the guise of Buddhist Monks

We often hear about those who are engaged in businesses and other rackets in the guise of Buddhist monks. Since the saffron cloth is immensely respected by Sri Lankans, it is being used by many culprits to cover up their dirty deeds. This in fact is a disgrace to those pure and honest Buddhist monks who follow the Aryan way. Therefore, att a time like this, the need for another Buddhist council is a dire need.

The bill seeks to set up a code of conduct and discipline which would enable Mahanayake theros to punish a bhikkus who engage in or carry out occult practices or similar activities and giving publicity to such activities; involve in trade or business activities; obtain driving licences and drive vehicles, engage in any employment in the public or private sector other than in the fields of education, social services and religious affairs and engage in activities unsuitable for a bhikku in a manner contrary to bhikku vinaya (discipline) in public places.

Although the government claimed the bill was drafted following consultations with the chief prelates of all three chapters, it was subjected to severe objection by members of the maha sangha, claiming that the Bhikkus are not objecting the government’s move to prevent Bhikkus from obtaining driving licences and engaging in businesses. Secretary of the Pevidi Handa organisation Ven. Bengamuwe Nalaka thero said their organisation protests against the arbitrary move taken by the government to control the Buddhist monks. The thero said Bhikkus had been engaging in astrology and had been leading uprisings against tyranny for many centuries. He said the proposed bill intends to punish monks for involving in such activities.

Justifying the government’s stance, Minister for Buddha Sasana Wijeyadasa Rajapakshe said the government would not be imposing any law on the conduct of Buddhist monks but would merely be tabling the bill to give legal validity to the proposed Bikku Dialogue as requested by the chief prelates. He said the ministry has taken steps to raise the awareness of the Maha Sangha regarding the proposed legislation.

Explaining further, the Minister said the bill would only give legal force to the existing disciplinary codes of the Maha Sangha. He said these reforms began 40 years ago in 1974 during the reign of then Prime Minister Sirimavo Bandaranaike regarding the amendment of the Buddhist Temperance Ordinance. While pointing out that the bill only contains the opinions of the chief prelates, Rajapakshe said the necessary regulations would be drafted by the respective chapters. According to the bill, the Karaka Sangha Sabha (Working Committes) of each Theravadha Bhikku Nikaya or Chapter (namely the three nikayas adopted and accepted in Sri Lanka in accordance with the Theravadha tradition as Shyamopali Maha Nakaya, Sri Lanka Amarapura Maha Nikaya, and Sri Lanka Ramgnna Maha Nikaya) is expected to formulate and adopt a Dialogue relevant to that Chapter.

The Minister of Buddhist Affairs in consultation with the Most Venerable Mahanayake theros of the three chapters is expected to appoint a five member panel of experts that shall consist of three Buddhist bhikkus; and two attorneys at law conversant with the disciplinary rules pertaining to Buddhist bhikkus for the purpose of examining the Dialogue.

The Bhikkus who violate aforementioned provisions will be punished with temporary or permanent expulsion from the residing temple, temporary or permanent removal from the office of Viharadhipathy, (Chief Incumbent) expulsion from the studentship, expulsion from the relevant chapter and cancellation of the bhikku registration, the bill says. Also, a bhikku who fails or refuses to comply with such decision shall be guilty of an offence and shall on conviction after summary trial by a magistrate be liable to a fine not less than Rs. 50,000 or to a terms of imprisonment not exceeding six months or both such fine and imprisonment.

Expressing his views about the bill, the Deputy Prelate of the Asgiri Chapter in the Siyam Nikaya, Ven. Wendaruwe Upali thero, said, “No one should get excited about this bill. This is a timely move. But it would be better to engage in a proper dialogue regarding the provisions of the bill before it is presented to parliament for approval.

“For certain provisions in the bill intend to prevent the maha sangha from engaging in traditional practices such as indigenous medicine. The main task expected from a monk is to build the moral qualities of the people. Although Bhikkus could contribute to the field of education, monks working as administrative officers in offices cannot be approved. Some Bhikkus are even asking for licences for driving. Some have requested elections duties. These are totally unacceptable. However, it is the practice of the Asgiri chapter to punish the wrongdoers according to the teaching of the Buddha. So it would be better not to involve the State in the execution of the punishments. So, the bill contains both pros and cons. We are still discussing them. “

Expressing his view on the proposed legislation, Deputy Prelate of the Sri Lanka Ramagna nikaya Ven. Prof. Warakawe Premarathana thero said the Bhikku Council should hold the power to decide these matters. Confirming this view, the acting registrar of the Malwatte Chapter ,Ven. Dr. Pahamune Sumangala thero, said nothing that surpasses the authority of the chief prelates, cannot be done.

Due to the behaviour and the conduct of certain Buddhist monks and Bhikku organisations, the good name of the Maha Sanga was tarnished. Hence some describe this as a move to protect the Buddha Sasana.

Expressing his views on the bill, the chancellor of the Sri Jayewardenepura University, Ven. Bellanwila Wimalarathana thero, says no one should become tensed about the bill. Pointing out that certain members of the clergy belonging to extremist and racist sects are trying to spread false views about the bill, the thero said it would only set up a mechanism to carry out the already existing disciplinary procedures of the Maha Sangha.

Ven. Wimalarathana thero further said, “The intention of this bill is to create a progressive Sangha Kathikawatha. During recent times, the Bhikku society created this Dialogue to address the lapses in Bhikku discipline. It was presented to both Chandrika Kumaratunge and Mahinda Rajapaksa governments. But in both occasions, the legislation was postponed. What the Mahanayaka theros intended was to create a separate legal framework for monks in order to minimise the influence of ordinary law imposed upon maha Sangha. This allows the Maha Sangha to conquer any outside force. But there could be imposters amongst Buddhist clergy who are against this procedure. We would ask them to become aware of the bill first.” However, certain monks have criticised this move claiming that even during the colonial period, despite the heavy resistance, the Buddhist monks had opposed white rulers, they had not imposed any laws upon the Maha Sangha. Several monks had even taken steps to file a petition at the parliament against this move of thie government. These protests even took a serious turn when Ven. Bengamuwe Nalaka thero threatened to lay siege to parliament with the people.

Expressing his views regarding the bill, Senior lecturer of Jayewardenepura University Ven. Dambara Amila thero said, “This is something that had been discussed since a long time. The intention of this bill is to allow the three Nikayas to create dialogues easily. This is an opportunity to save the Bhikku Sasana. This could be used to solve many problems that we see among Buddhist monks today. It is important that the Bhikku society to have a strong stance regarding issues such as monks engaging in sorcery, businesses and even leaving the Sasana. If there is legal backing for a Kathikavatha, it is going to become influential. So, it is important to support this act.”

Criticising the proposed legislation, Chairman of the Bodu Bala Sena Ven. Galagodatte Gnanasara thero said, “The government is attempting to bring in an Act that puts conditions on the Buddhist clergy. Buddhist clergies would not be controlled by parliament, and that any rules on monks should only be proposed by the Buddhist Sangha. We are facing these problems because of not taking the right decision at the right time, a point which has not been understood by political leaders. We will not let the Act to be brought. We respect the country’s law, but we are not going to bow before the white man’s law unless it is relevant to our country. We request Buddhist monks to boycott the courts of this country. If the government fails to call for a Sangh akadikaranya, (Judician courts for monks), we will break the civil law. Then the government has to convert every coconut tree into a gallows and every school into a prison to suppress the Sinhala Buddhist people.”

The ecretary of the Ministry of Buddha sasana, Wasantha Ekanayake, and the Presidential Coordinator, Shiral Lakthilaka, also took part in this meeting.

Here the President expressed his gratitude for the Maha Sangha for participating in the event, and he  also  emphasised the importance of establishing such a Buddhist think tank in the present political context. He said it is only a proposal and that it should be passed in parliament after making the necessary changes.

The President further said the government would take any step to pass it as an emergency bill but would adopt it only with the blessing of the Maha Sangha. The ability of the Buddhist philosophy to influence issues in the field of environment, social and cultural issues is very comprehensive, the President said. The President said that before using them to find practical solutions for these issues is vital. Accordingly, the President has promised that the bill would be presented to the Chief Prelates for having further advices.