Moodu Maha Viharaya: The sun sets in the East for Buddhist temple

Pottuvil, Sri Lanka -- He stood in the sands,a lonely figure, holding in his hands the offerings we had made to him. Alone and vulnerable he has dug himself into this hostile territory in a small ‘sanghavasa’ (abode of bhikkus) to protect and preserve an ancient temple on the beaches in Pottuvil in Eastern Sri Lanka. It is a one man battle against heavy odds. 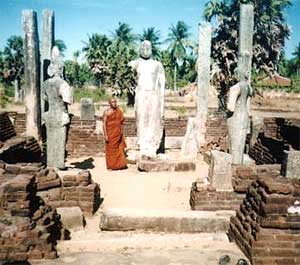 Pathetically isolated, incredibly neglected, the Ven Kataragama Siri Ratana, his robes blowing in the wind, stood there within what is known as the strict archaeological reserve of Moodu Maha Vihare at Pottuvil and watched our vehicle going out of sight.This is a story of courage, fearlessness and frustration. This is a Buddhist temple located in a predominantly Muslim area.

In recent years Moodu Maha Vihare has broken into the news , controversially no doubt, as marking the spot where the redoubtable Vihare Maha Devi was washed ashore, in her boat. She was the daughter of King Kelanitissa , who sacrificed herself to save her father’s people from the fury of the sea, says the legend. King Kavantissa married her and she became the mother of Dutugemunu one of Sri Lanka’s most heroic kings.

Moodu Maha Vihare is an ancient temple dating back to the 5th century, and it has to be protected as part of the Buddhist heritage in the east, which has come under obliteration in recent years.

The Ven Siri Ratana hails from Panchimaharamaya in Tissamaharama. It was his guru the Ven Tangalle Sri Sunanda Maha Nayake thera, Adhikarana Sanghanayake of the Southern province, who first studied the ‘Sannas patra’ (official document conferring authority) of the temple and traced the beginnings and history of the vihare. He came to this temple in the 1960s and built a small ‘avasa’ for bhikkus to live in.

Since then bhikkus have lived in this temple, but it was abandoned eventually due to the hostility of the environment, its isolation and the lack of Buddhist devotees who would help to sustain the vihare. As late as 1960 the whole temple complex was a mound buried under sand in an anonymous seascape.

Around this time the Archaeological department carried out excavations and unearthed three big statues, twelve tall pillars and several short stumps in a single grouping.Around the area are visible parts of pillars,walls, foundations steps buried under the sand. There is also an inscription which is almost totally effaced. This is all there is of this temple at present.

"I came here in 1996", said the Ven Siri Ratana. "The ‘avasa’ was built of brick but I had to get it plastered and colour washed with the contributions I got from pilgrims. I also built two toilets for visitors", he said.

The central Buddha statue could be about 10 feet tall and its head has been badly damaged. The head was stolen and the Ven Siri Ratana found that it was being used as a ‘liggala’ (stone for an open hearth). He rescued it and the head with the face partly obliterated has been put back on the body. The other two statues with their arms broken are believed to be those of the Bodhisatva Avilokiteswara and the goddess Tara Devi or of King Kavantissa and Vihare Maha Devi.They stand in mute determination amidst the ruined pillars and the fallen bit and pieces.

The Ven Siri Ratana leads a most incredible life of hardship and tribulation.The Buddha Sasana Ministry used to pay him Rs 500 a month some time ago.

Then it came down to Rs 300 and now it has stopped altogether. He lives alone, has to cook his own food most of the time, because the nearest Buddhist family lives about one and a half kilometers away. Pilgrims leave him food and dry rations.But food is the least of his worries, he says.

Pilgrims are few and far between for two reasons. There is no name board giving directions to visitors. The name board has been stolen.He has now got a donation to put up a name board and he hopes to do so. In addition the road leading to the temple has become narrower and narrower because encroachers are moving their fences further and further onto the road. As a result big buses carrying pilgrims are unable to drive upto the temple.

The temple is assailed not only by sea erosion by also by fast and furious human encroachment. The sea brings in loads of sand while the Muslim population of the vicinity is increasingly encroaching on temple land. Alas the Archaeological department does not do anything about it, even though in another part of the country a bhikku was arrested for digging a well and pits for toilets without the permission of the Archaeological department.

The Ven Siri Ratana explained the land problems of the temple property. According to the original ‘sannas’ the temple owned around 264 acres of land. It extended to the Arugambay road and the Arugambay lagoon, and went right upto Kodimarachchiya, where there is a mosque now.

In l965 according to a Gazette notification 30 acres, 3 roods and 2 perches were demarcated for the temple on the landside by the Archaeological department. People who had encroached were compensated and relocated.

But this was not for long. They came right back

If it was not so exasperating and unjust it could even be funny. In 1992 the temple was given electricity and three posts had to be put up for the connection. Now one post is in the garden of a private house enclosed by a wall.So what can a lone bhikku do?

What happened in 2002 was not only bizarre, but totally unfair by the temple and the Buddhist public of this country.The Archaeological department confined the strict reserve for the temple to six acres and the balance 25 acres (allocated according to the 1965 Gazette notification) was demarcated from the seaside, in fact a sea reservation- a sand dune which the sea is eating away.

The temple has been dispossessed of its lands, and encroachers are occupying temple lands on the landside The temple had 20 acres of coconut; it has six trees now. The rest are in the ownership of encroachers.

The bhikku has complained to the powers that be and to the police. But of no avail.On the day before our arrival another new fence has been moved into temple land and he had to complain to the police. He has been asked to come to the Akkarapattu police station for an inquiry. Another cadjan fence has been built bang up against an ancient foundation very close to the ‘avasa’.

Not least among the annoyances are the politicians who urge the Ven Siri Ratana to leave. How can you live here alone? This are our lands. Go away, he is told. But he has dug himself in and he is determined to stay. I am here to protect this temple, he says. But I need the support of the Buddhist public to rescue the temple from its present plight, he says.

He has the following suggestions to make for the survival of the temple. He says:We want the land excavated by the Archaeological department so that more of the remains will be unearthed.Name boards have to be put up giving directions to pilgrims and the roadway to the temple has to be widened so that buses can reach the temple.

A pilgrims rest with basic facilities must be built, says the bhikku, in addition to a wall on the seaside. A museum has to be built to house the artifacts which have been dug up. They are still in the house of the watcher, he says.We have had the road s blocked, bricks and other items carried away and the statues damaged. A moonstone has been spirited away and some items were found in a well, says the Ven Siri Ratana.

Five Bo saplings have been planted here and all of them have been destroyed. I have planted the sixth, he says.He has been going to the police often enough, walking one and half kilometers to the main road.Nothing fazes him. He is determined to stay and preserve this temple.

It is never safe to leave the temple. When he went to Tissamaharama for four days to attend the funeral of his guru, the temple was stripped and everything was stolen, including the doors, he says. He has since replaced the doors.There are so few Buddhists nearby that there is hardly anyone coming to the temple even on a poya day.The partially exposed parts seem to reveal that in the past there was a large temple complex here.

This temple should not be left to its fate, as the Archaeological department is doing. The Buddhist public should band together to save it from total destruction.