PERALIYA, Sri Lanka -- Butchers hung up their knives, Buddhist monks got ready to chant hymns and survivors prepared to throng temples as Sri Lanka - on Sunday began to mark the one-year anniversary of the Indian Ocean tsunami. People from different parts of Sri Lanka - prepared to join President Mahinda Rajapakse in Peraliya on Monday to honor more than 31,000 fellow citizens who died in the tsunami, the second highest toll after Indonesia. 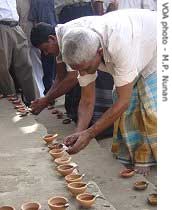 A two-minute silence from 9:30 a.m. (0330 GMT) the time when the tsunami struck will be observed, after which Rajapakse will unveil a monument for the victims.

Peraliya on Sunday prepared for the ceremonies at the village's Buddhist temple.

Arrangements were also being made for Prime Minister Ratnasiri Wickremanayake to lay a foundation stone for the construction of a tsunami museum meters away from the site of the train disaster.

Banners hung on both sides of the road leading to the temple with words honoring the tsunami dead and urging people to preserve the environment to avoid future disasters.

``Let there be never a tragedy like this in our country,'' read one banner.

In the adjoining village of Seenigama which lost 120 people, relatives and friends gathered to light oil lamps in memory of their beloved who perished in the tsunami.

Four new postage stamps were being issued showing tsunami waves and parts of the ill-fated train.

Monks prepared for religious memorials Monday to seek blessings for those who died so that the victims can be released from the cycle of rebirth.

All meat stalls in the capital, Colombo, will remain closed on Monday as a mark of respect for the victims, the Meat Producers and Marketer's Society said in a statement. Sri Lanka - 's Buddhist traditions forbid harming living beings.

Rajapakse in his address to the nation is expected to announce an accelerated plan to rebuild homes and businesses devastated by the disaster.

Initial hopes that the disaster could lead to an easing of tensions between Sri Lanka's government and Tamil Tiger rebels quickly faded amid bickering over reconstruction aid, and there are fears the island will return to civil war.

Sri Lanka - 's efforts to rebuild were praised in a joint report by international agencies.

``Much has been achieved this year with almost 250,000 of internally displaced moved from the emergency camps to some 54,000 transitional shelters and the ongoing reconstruction of permanent housing picking up pace,'' said a joint statement from all U.N. agencies, the International Organization for Migration, the Asian Development Bank, the International Monetary Fund, and the World Bank.

``But more needs to be done,'' they said in a report released to mark the disaster.