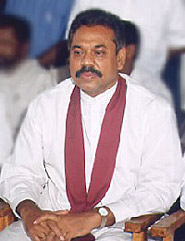 "Enough is enough," Rajapakse told The Associated Press in an interview as spiraling violence threatened to undermine a three-year-old cease-fire with the Liberation Tigers of Tamil Eelam, blamed for last week's suicide bombing by a pregnant woman that targeted an army general.

"My religion - Buddhism - teaches me how to be patient," Rajapakse, 60, said. "They tried to kill my general by using a pregnant woman. This was a barbaric act, but even after all these, my government is willing to have peace talks."

His comments came amid a surge in violence that has derailed peace talks between the government and the Tiger rebels and pushed the country closer to a return to civil war.

European peace monitors already were trying to arrange talks between the two sides to shore up the truce and find a political solution.

"Some men dressed in black broke into our office and opened fire," said N. Vithyatharan, editor of the Uthayan newspaper based in the northern town of Jaffna, 185 miles north of Colombo.

He said the newspaper's editorial manager and a circulation assistant died, and another employee was wounded.

Uthayan is an independent newspaper, but is considered to have close links to the rebels.

"I have no doubts that this is a work of armed groups working with the government security forces," Vithyatharan said, adding that the reason for the attack may have been a cartoon the newspaper published on Monday of the leader of rival group showing him prostrating himself before the president.

Tamil Tiger rebels accuse the government of using other armed Tamil groups to attack the guerrillas. The government has denied backing such groups.

Rajapakse phoned the newspaper publisher and denied any government involvement in the attack, Vithyatharan said.

"His thinking was that the Tigers had done it ahead of his speech to embarrass him. But we clearly told him that the government should bear the responsibility," Vithyatharan said.

The Tigers began fighting the government in 1983 to create a separate Tamil nation, accusing the majority Sinhalese-dominated state of discrimination. The conflict killed more than 65,000 people before the February 2002 cease-fire.