United States to support training of Buddhist clergy in English, Tamil and IT

Colombo, Sri Lanka -- The United States today announced that it will provide technical assistance to create a language and information technology (IT) resource center to train 400 members of the Buddhist clergy in the English and Tamil languages and IT, as well as to introduce peace-building tools and techniques. 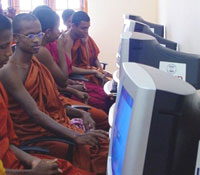 In a statement, it said, “The United States is working to help build the capacity of monks dedicated to opening dialogues and finding non-violent solutions to the conflict. The Buddhist ethical principles of non-violence and peaceful co-existence can play a positive role in the formation of a multi-ethnic, multi-religious and pluralistic Sri Lanka. The Buddhist clergy will have tremendous influence in educating and shaping the attitudes of Sri Lankans about peace and inter-ethnic relations.”

“By raising awareness in the clergy about issues related to the effects of war, and the benefits of peace, and exposing them to differing perspectives and examples from other countries, we hope the center will provide a springboard to strengthen their voice for non-violent solutions,” said US Agency for International Development (USAID) Mission Director Dr. Carol Becker.

USAID’s Office of Transition Initiatives (OTI) has funded 558 grants for an estimated total of $17.4 million to support efforts to end the long-standing conflict in Sri Lanka by collaborating with local groups to increase awareness and understanding of key transition issues and to promote participation and collaboration among diverse groups as they set and address priorities.