New York, USA -- The Nayaka Mahathera of the United States told the visiting President Mahinda Rajapaksa that he was tackling the country’s terrorist problem cleverly. 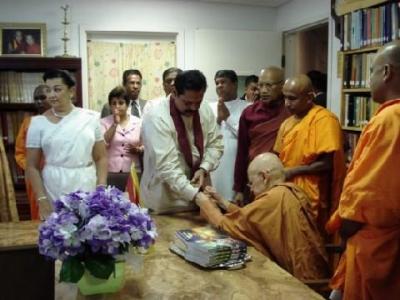 Venerable Kurunegoda Piyatissa Nayaka Mahathera said in a reception accorded to Preesident Mahinda Rajapaksa at the New York Buddhist Vihara that he felt for the first time after a long a period of time, the Country’s President was on the correct track in solving the terrorist problem that has been agonizing Sri Lanka and he was leading the country properly.

He said his actions were reminiscent of another leader who hailed from Rajapaksa’s native Ruhuna, namely the Great Dutugemunu.

Venerable Piyatissa said it was a historical occasion for his temple since President Rajapaksa’s visit was the first visit of a head of state of Sri Lanka to the temple although it had been visited by President Clinton before.

Reminding that a day before the President’s visit his young son visited the temple by himself Kurunegoda Piyatissa Nayaka Maha Thero said he was impressed by the humble and unassuming nature of the young man and congratulated the President and his wife for bringing up the children molding them in Buddhist values.

At this function President Rajapaksa presented Venerable Piyatissa a glass plaque that said he and Sri Lanka appreciated the great service rendered by the Venerable Kurunegoda Piyatissa to his native Sri Lanka and by the dissemination of the dhamma in the world.

The first copy of the Sambudu Guna Mahimawritten on the immense virtues of Great Buddha authored by the Venerable Kurunegoda Piyatissa was presented to President Mahinda Rajapaksa at this function. A renowned author he has published 16 books in Sinhala and three books in English, before.

Making an introduction of the Nayaka Maha Thera before the presentations this writer said that when the Venerable Piyatissa first came to New York there were only four Buddhist temples in the city of New York.

This writer said the Venerable scholar monk was able to form the first Buddhist Council of New York uniting all Buddhist denominations of which he is the President Emeritus. Today, this great city due to the constant hard work of the council has 97 Buddhist temples. This writer said by holding annual Buddhist processions in the city the Council was able to introduce Buddhist monks to the general public and a glimpse of Buddhist way of life. Today, due to the hard work Buddhist monks have become very familiar with the New York city dwellers.

President Mahinda Rajapaksa addressing the audience after the presentation said Sri Lanka is privileged to have such erudite monks like Venerable Kurunegoda Piyatissa.

He said he always applied Buddhist teachings of patience when the Liberation Tigers of Tamil Eelam (LTTE) was constantly trying to provoke by killing at least five soldiers a day . But when the the country’s Army Commander was attacked by a suicide bomber and 65 innocent bus passengers including 15 children were killed no responsible government could keep quiet any longer , President Rajapaksa said.

The President said when Mavil Aru irrigation canal was closed by the LTTE , Muslims in Muttur were attacked and evicted and Sampoor turned into an aggressive LTTE attack point against the country’s vital and strategic harbor Trincomalee and Palaly military Airport no government worth its name could follow a policy of appeasement just because the LTTE was a party to a Ceasefire Agreement and intermittently engaged in negotiations as a ploy.