Colombo, Sri Lanka -- Throughout history from the time of King Dutugemunu in 1815, the holistic support and efforts towards independence of the country by Buddhist monks have always been a well known fact. 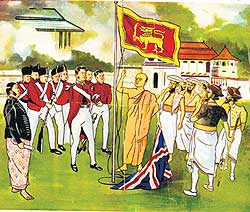 Ven.Tissa during the reign of King Valagamba, Ven.Deega during the reign of King Rajasinghe and the monks who lived during the invasion of the Cholas and Ven. Senegal Rathnankara in the kingdom of Sitawaka are some of the monks who have been at the helm in the quest for freedom as stated in the annals of history. On the 59th independence of our country it is a great pride to state that monks are currently involved in the forefront.

Venerable Ellawala Medhananda at an interview said,"We have faced many foreign invasions throughout history but we have never wholly surrendered to colonialism. But unfortunately in 1815 the difference of opinion between the despotic King Sri Wickrema Rajasinghe and the Kandyan kingdom together with the sectarian division of the monks paved the way to British colonialism. Sri Lanka was given away in writing to the British.

The monks and the Kandyans together planned an uprising in secret. Even before the British, the monks were dedicated to safeguard the Tooth Relic of the Buddha during the invasion of the Portuguese and Dutch. Ven. Dhammadissi from Asgiriya protected the Relics by hiding it in Kandy with the help of the Radellas from the invasion of the Dutch in the Kandyan kingdom. It is worthy to note the service of Ven.Rambukwella Rathnajothi, Pothuhara Rathna Pala, Kanumale Dammadissi were involved in the national front.
Ellawala Madananda Thero

Poetry that depicted the sorrow within of being ruled by invaders were common during this period. The monks proclaimed their loyalty to their motherland and the concern of not having a ruler from their own country gave much sadness and bitterness. They discussed various plans and toured the island in search of a way of getting rid of the British from the island. The British Governors rebuked and refused entry to foreign land. Ven. Ihamaga requested to go on a pilgrimage but was refused as the Governor believed that he was on the look out for a prince to deliver the country from the grips of the British and Buddhist monks were banned from foreign travel. This statement was made by a letter to England by Governor Colebrooke in 1816. The observation made by Governor Colebrooke stated that the revolt organized by the Buddhist monks is due to the jealousy of the Christian religion being popular among the masses.

They were intent in destroying Buddhism. The monks believed in protecting their religion and with the help of the Kandyans formed the National Liberation Front and the revolt that began from Dambulla spread to the coastal areas. They made a relative of King Sri Wickrema Rajasinghe the ruler and lived in an area free from the British. This is stated as a riot of 1818 which is wrong as it was only a protest against British rule that was causing much concern within the country as many monks and leaders of the country were put to death. They burnt and tortured and destroyed means of living and left people to starve to death.

Paddy fields were burnt down to prevent people having access to food and burnt down houses. The destruction in 1818 has made certain areas infertile even today. Ven, Wariyapola Sri Sumangala Thero was involved in the crusade of freedom and it is said that he trampled the British flag in Kandy when the signing off of the country to the British was in progress. He was imprisoned for hiding the Tooth Relic as it was stated that the Relics belong to the Government in power. Communication among the people was possible through the monks. Ven Ihagama, Kapuliyadde and Poddalagoda were arrested but the former was able to escape and later caught again due to the spies posted among the people who worked against their own.

The Colebrooke Commission understood the uprising by the Buddhist monks was due to the lack of freedom to take the Tooth Relic in the annual procession as related to culture and by rule of law they were to protect Buddhism, temples and the monks. The efforts made by the British to convert people into their own faith caused much concern.

Later the British realized the importance of protecting Buddhism which was the religion the majority practiced in Sri Lanka and permission was granted for some bhikkus to participate in the procession of the Tooth Relic. After many uprisings and negotiations Sri Lanka gained independence in 1948."