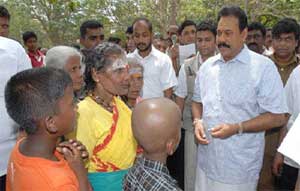 Speaking to the devotees from North and East the President said that the Government has initiated all the necessary activities that should be carried out to develop the regions and to uplift the livelihood of those people. The implemented projects would be prioritized and accelerated in order to achieve the intended development in Northern and Eastern provinces.

President Rajapaksa participated in the Buddhist religious observances at ‘Kiri Vehera’ officiated by incumbent monk of Kiri Vehera temple Ven. Aluthwewa Soratha Thera and as well as in Hindu Poojas at the Kataragama Devalaya (temple).

The President moving freely among the crowd also took time to help in distribution of food at a ‘Dansala’ organized by the devotees themselves.