Colombo, Sri Lanka -- Opposition and United National Party (UNP) leader stirred up another hornets nest by telling reporters of print and electronic media that he told Malwatte Mahanayaka Thero to ordain all journalists. 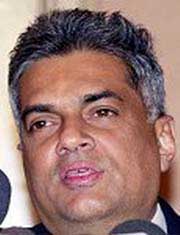 << Ranil Wickremesinghe was heard saying, “I urged the Maha Nayaka Thero to ordain all of you media men!

UNP leader Ranil Wickremesinghe stepped out of a meeting with the Most Venerable Mahanayaka Thero of the Malwatte chapter of the Siamese sect at the Thero’s residence, Malwatte Maha Viharaya in Kandy and told reporters anxious to obtain a statement from him that he told the Mahanayaka to ordain them.

Then he left them without adding anything more to the terse statement. The meeting of the UNP leader with the Most Venerable Thibobotuwawe Sri Siddhartha Sumangala Mahanayaka Thero of the Malwatte lasted about one hour. But it was not open to the press.

With the backdrop of the Maha Nayaks Thero being very critical of Ranil Wickremesinghe recently the reporters considered the meeting to be very newsworthy. When Wickremesinghe was passing them, gathered outside the assembly hall, one reporter asked him to make a statement. He stopped turned to them and said, “I urged the Maha Nayaka Thero to ordain all of you media men!” Thereafter, he left them without uttering any more.

The video clip of the statement was broadcast by most television stations. The prime time news of the state owned TV channel Independent Television Network carried the incident in full and comments very critical of the statement. The TV station together with the clip played back video clips of Wickremesinghe telling one of his party meetings that journalists are licking the boots of the government and his earlier statements attacking the Buddhist monks, like one Buddhist monk wants to travel the Noble Eight Fold Path with a Mercedes Benz.

Venerable kamburugamuwe Vajira Thero said what that Wickremesinghe implied was that since all media men are wrong doers they should be ordained. He said the UNP leader was implying that the Buddhist order of sangha was an institution of wrong doers.

Dr. Pandula Endagama said that in this statement Wickremesinghe was trying to insult the Buddhist order of the Sangha. If what he meant was to correct somebody they should enter sangha, it was Wickremesinghe who should enter the order since he needed the correction most.

Dr. Endagama said by this statement Wickremesinghe is trying to change journalists by humiliation who is publishing correct information so that they could be only publishing information favorable to him.

He said Sri Lanka is a country Buddhist leaders like the monks and Buddhist monuments are respected by even foreign visitors. The continuous ridicule of Buddhist values by Wickremesinghe would not be appreciated by Buddhists and non-Buddhists alike, he said.