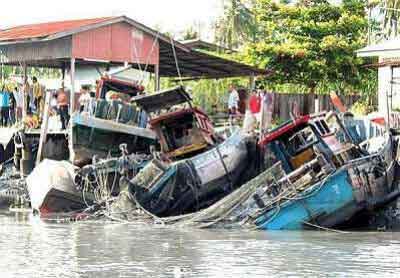 The death toll began climbing sharply after Sunday morning's 9.0-magnitude quake that struck deep beneath the Indian Ocean off the coast of Indonesia, the most powerful temblor in four decades.

The waves sped away from the epicenter at over 500 mph before crashing into the region's shorelines without warning, sweeping people and fishing villages out to sea. Millions were displaced from their homes and thousands were missing.

Officials said the death toll would continue to rise and warned that disease outbreaks were possible.

Indonesia, Sri Lanka and India each reported thousands dead, and Thailand - a Western tourist hotspot - said hundreds were dead and thousands missing. Deaths were also reported in Malaysia, Maldives, Mayanmar, Bangladesh and even in Somalia, 3,000 miles away in Africa.

On the remote Car Nicobar island south of India, Police Chief S.B. Deol told New Delhi Television he had reports "that maybe 3,000 people are dead." If confirmed, that would raise the death toll past 17,000.

In Bandah Aceh, Indonesia, 150 miles from the quake's epicenter, dozens of bloated bodies littered the streets as soldiers and desperate relatives searched for survivors Monday. Some 500 bodies collected by emergency workers lay under plastic tents, rotting in the tropical heat.

"We have ordered 15,000 troops into the field to search for survivors," said military spokesman Edy Sulistiadi. "They are mostly retrieving corpses."

Refugees in nearby Lhokseumawe, many of whom had spent the night sleeping outside on open ground, complained that little or no aid had reached them. The city's hospital said it was running out of medicine.

The Indian state of Tamil Nadu was also hit hard, with 1,700 reported deaths. Chief Minister Jayaram Jayalalithaa called the scene "an extraordinary calamity of such colossal proportions that the damage has been unprecedented."

Nearby beaches resembled open-air mortuaries as fishermen's bodies washed ashore, and retreating waters left behind others killed inland. In Cuddalore, red-eyed parents held a mass burial for more than 150 children. About half of the nearly 400 who perished in the town were children, leaving townspeople in stunned bereavement.

The earthquake's aftereffects came without warning. Witnesses said sea waters at first retreated far out into the ocean, only to return at a vicious pace. Some regions reported a crashing wall of water 20 feet high.

"The water went back, back, back, so far away, and everyone wondered what it was - a full moon or what? Then we saw the wave come, and we ran," said Katri Seppanen, who was in Thailand, on Phuket island's popular Patong beach.

Sri Lanka and Indonesia had at least a million people each driven from their homes. Warships in Thailand steamed to remote tropical island resorts to search for survivors as air force helicopters in Sri Lanka and India rushed food and medicine to stricken areas.

In Indonesia, villagers near northern Lhokseumawe picked through the debris of their ruined houses amid the smell of decomposing bodies.

One man, Rajali, said his wife and two children were killed and that he couldn't find dry ground to bury them. Islamic tradition demands that the deceased be buried as soon as possible.

"What shall I do?" said the 55-year-old, who like many Indonesians goes by a single name. "I don't know where to bury my wife and children."

In Sri Lanka - an island nation some 1,000 miles west of the epicenter - about 25,000 troops were deployed to crack down on sporadic, small-scale looting and to help in rescue efforts. About 200 inmates took advantage of the chaos, escaping from a prison in coastal Matara.

The U.S. Geological Survey said the quake's magnitude was 9.0 - the strongest since a 9.2 magnitude temblor in Alaska in 1964, and the fourth-largest in a century. The quake was nearly 6 miles deep and was followed by a half-dozen powerful aftershocks, some in the 7-magnitude range.

The quake occurred where several geological plates push against each other with massive force. The USGS said a 620-mile section shifted, triggering the sudden displacement of water.

President Bush expressed his condolences over the "terrible loss of life and suffering." From the Vatican, Pope John Paul II led appeals for aid for victims, and the 25-nation European Union promised to quickly deliver $4 million.

Aid agencies and governments around the world began pouring relief supplies into the region on Monday. Japan, China and Russia were among the countries sending teams of experts.

Jasmine Whitbread, international director of the aid group Oxfam, warned that without swift action, more people could die. "The flood waters will have contaminated drinking water and food will be scarce," she said.

In Thailand, Gen. Chaisit Shinawatra, the army chief, said the United States has offered to send troops stationed in Japan's Okinawa island to assist. Thailand was considering the offer.

Tsunamis as large as Sunday's happen only a few times a century. A tsunami is a series of traveling ocean waves generated by geological disturbances near the ocean floor. With nothing to stop them, the waves can race across the ocean like the crack of a bullwhip, gaining momentum over thousands of miles.

Some tsunamis appear as a tide that doesn't stop rising, while others are turbulent and savagely chew up the coast.

An international tsunami warning system was started in 1965, after the Alaska quake, designed to advise coastal communities of a potentially killer wave.

Member states include all the major Pacific rim nations in North America, Asia and South America. But because tsunamis are rare in the Indian Ocean, India and Sri Lanka are not part of the system. Scientists said the death toll would have been reduced if they had been.