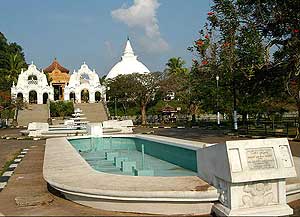 The occasion was marked with the laying of foundation stones for a new building complex at the base camp of the Hermitage to provide better accommodation facilities for lay Buddhist visitors and meditation practitioners.

The Forest Hermitage is nearly 500 acres in extent and situated in a tropical forest reserve surrounded by scenic paddy fields. It is located close to the village of Meethirigala, off Dompe on the Colombo-Kandy Road .

At a time when Buddhism had lost its most supportive and protective structure, namely meditation, Asoka Weeraratna, who founded the German Dharmaduta Society and the Berlin Buddhist Vihara in Germany in the 1950's for the benefit of the German people , established the Forest Hermitage (not very far from Colombo) in 1967 to enable Buddhist Yogi Monks to meditate and contemplate in a suitable and peaceful environment.

He brought there the most respectful meditation teacher, the late Venerable Matara Srî Ñânârâma Mahâ Thera, widely recognized as one of Sri Lanka 's outstanding meditation masters of recent times, to be the guide and instructor.

Apart from Sinhala Buddhist monks and laymen, many foreign monks and laymen alike have had the opportunity to pursue here the practice of meditation with full dedication, unhindered by other tasks and duties. Some of them have come from USA , some from Canada , England , Netherlands , Germany , Austria , Switzerland , Portugal , Italy , Yugoslavia , Czechoslovakia , Greece , India , Singapore , Taiwan , Korea , Japan , Australia , and New Zealand . They include the well known American monk Ven. Bhikkhu Bodhi, the Australian monk Ven. Pannavaro (founder of the Buddha Net), the Czechoslovakian monk Ven. Dhammadeepa and Ven. Ñânadassana Thera (Greece ) among others.

Having equipped the monastery with all the facilities conducive to the meditative life, and having found an accomplished meditation master to direct meditation training, and then his mission accomplished Asoka Weeraratna renounced the lay life and entered the Buddhist order under the name Venerable Mitirigala Dhammanisanthi Thera in 1972.

Das Miriyagalla, Vice-President of the Meethirigala Nissarana Wanaya Sanrakshana Mandalaya (Forest Hermitage Preservation Board), in his address on the occasion, observed that the founding of this Hermitage by Asoka Weeraratna was the flowering achievement of the post - Buddha Jayanthi Buddhist resurgence in Sri Lanka . He said:

Miriyagalla further said that human beings live only on planet earth. Sri Lanka's special place on the ancient world map has been highlighted by many ancient historians and travelers of yesteryear. They had come from places like Rome and Greece in Europe, the Middle-East, Persia and other Asian countries. The most significant account is set out in the World map drawn by Claudius Ptolemy in the 2nd Century AD. This map has been used for over 1200 years as the most authoritative map of the world. In this map many detailed features of Sri Lanka are shown, he added.

Miriyagalla attributed the decision of India's Buddhist Emperor Asoka to send his own son, Arahat Mahinda to Sri Lanka for spreading the word of the Buddha (and thereafter his own daughter Sangamitta with the Bo sapling) to the important position that Sri Lanka had occupied in the ancient world - whereas to all other countries the Emperor had sent missionaries drawn from outside his own close family circle.

Venerable Dhammajeewa, the Chief Monk (Kammattana) of the Hermitage observed:

"There is a growing interest expressed by many people in different parts of the world for knowledge relating to meditation. We have seen that many Buddhist organizations both in the East and the West are making earnest requests for assistance and guidance on meditation. Meethirigala Nissarana Wanaya has responded to this interest positively. Further, Buddhists should make full use of the opportunity available for getting the maximum benefit out of time – the most valuable resource we have. The utilization of time for optimum spiritual benefit is very important. It is a challenge that we must accept."

Ven. Dhammaransi Thera, Deputy Head monk of the Hermitage, enumerated the contributions of Asoka Weeraratna to Buddhism and compared Emperor Asoka's role with that of Asoka Weeraratna. He said that as much as Emperor Asoka was honoured by his contemporaries and posterity by the sobriquet 'Dharma' (Dharmasoka), Asoka Weeraratna was likewise entitled to be honoured as 'Weera Asoka' for his determination and capacity to translate a prophetic vision into reality against all odds. Both the Asokas had left a sweeping legacy of spreading Buddhism touching several continents. The Venerable monk added that it was up to posterity to ensure that this legacy was protected and fostered.

Emeritus Professor Jayadeva Tikasiri, President of the German Dharmaduta Society, recalled his close association with Asoka Weeraratna from his childhood days when both of them were students at Mahinda College, Galle.

Lochana Gunaratne, Architect gave details of the building plans in relation to the new construction. The proposed project is to build a new Dhamma (Sermon) hall for lay people, a dormitory and hygienic kitchen / toilet facilities to encourage and foster meditation retreats at Meethirigala.

P.W. Amarasekera, President of the Meethirigala Nissarana Wanaya Preservation Board welcomed the guests and thanked them for their presence. Daya Samarakoon (Australia ), and the two Joint Secretaries of the Board, Chandrasiri Sumanasekera and Vishantha Peiris also spoke.