Colombo, Sri Lanka -- It was most auspicious that after three months spent working for a tree conservation society in Sri Lanka, my last trip was to visit the country's most famous tree. 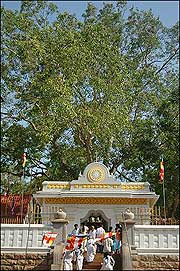 << The sacred Bo tree in Anuradhapura

The Sri Maha Bodhi or sacred Bo tree in Anuradhapura is apparently taken from a cutting of the original Figus Religiosa where Buddha attained enlightenment.

It is the oldest historically authenticated tree in the world for it has been tended by an uninterrupted succession of guardians for over 2,000 years, even during periods of foreign occupation.

Today it is difficult to get close to the tree which stands on a platform in a temple complex.

Firstly there is the security situation. Terrorists have targeted sacred sites in the past and rather disconcertingly for what is meant to be a spiritual experience, it is necessary to be frisked and have your bag checked before entering.

Then there are the constant stream of pilgrims coming to make offerings or simply to meditate near the holy tree.

Squeezing past school children bearing lotus flowers or old ladies reading from sacred texts to catch a glimpse of what looked like a perfectly ordinary tree, I was soon caught up in typical temple confusion.

Even after 12 weeks in Sri Lanka I have struggled to understand Buddhism or at least the complex rituals around "auspicious times".

A weekend trip to the ancient cities in the north of the country helped a little. Cycling around Polonnaruwa, the royal capital of Sri Lanka over a thousand years ago, it is possible to get an idea of the glittering dynasty that once ruled the land.

A very good museum that reconstructs the seven storey palace with 1,000 reception rooms and ornate swimming baths gives an idea of the high life enjoyed by kings while the giant Buddha statues and carvings on the temples show how seriously they took the afterlife.

The lack of other tourists and freedom to explore made me feel like Indiana Jones on wheels.

However Anuradhapura, a later capital, is just too big and complex to cycle around - not that that stopped us. The stupas here date from 300 BC right up until the present day with not much to distinguish between them.

After a few hours cycling in the hot sun the huge white domes and fluttering prayer flags all began to merge into one colourful historical spectacle.

Things only really became clear after visiting the biggest stupa at night. Hundreds of pilgrims dressed in white were sleeping on the stone floor just to be close to the temples where they can meditate about this life and gain good karma for the next.

It was difficult to understand but there was a sense of something very deep and ancient that has not changed in a thousand years.

Like most things in Sri Lanka, it felt like I was only just beginning to learn what was going on. After all three months is not long to try and understand another culture or to make a difference to a country.

So, standing under the sacred Bo tree could I really claim to have done anything for trees in Sri Lanka through my work as a communications advisor to Ruk Rakaganno (http://rukrakaganno.sacredcat.org)?

I have certainly gained publicity for the organisation and their work through this blog and articles for Sri Lankan newspapers and magazines. I have also helped to raise awareness through writing a presentation to be given to corporations and attending public meetings and events.

In judging whether I was useful or not, the big question is: Is it sustainable? On the one hand Ruk Raks simply do not have the staff to continue firing off press releases, updating the website or writing brochures.

On the other the nature of publicity is to establish the name of an organisation in people's minds in the long term. Hopefully these contacts, articles and reports will come in useful in gaining funding for Ruk Raks in the future.

There is certainly more that could be done to encourage people to plant more trees through extending the home gardening and schools awareness programmes and improving the Sam Popham arboretum in Dambulla.

On a more personal level I have certainly gained an awful lot from working in Sri Lanka.

All the staff at Ruk Raks were very kind and I would like to think we have learned a few things from each other's culture even if it is just that I know how to eat rice with my hands and they know how to send an e-card.

I also learned an enormous amount from living and travelling with other volunteers.

Challenges Worldwide (www.challengesworldwide.com), the Edinburgh-based charity that organised my placement, had 20 volunteers in Sri Lanka at the height of its operations this year.

Young professionals are working across a range of organisations from female-friendly small business initiatives to renewable energy projects.

Placements are from three to six months in areas such as human resources, accountancy or communication. Of course people have mixed experiences but on the whole hard-working professionals are helping charities in Sri Lanka to develop and grow.

Short term volunteers are not able to make the difference that big NGOs can - and some argue the money would be better spent going directly to a country - but I would say that young professionals working for free to improve a charity in the long term can be part of development alongside direct aid.

Unfortunately the biggest problem Sri Lanka faces at the moment is the ongoing civil war. It was just very sad to know that most of my work colleagues are forced to take public transport everyday when buses are regularly being blown up. The government has been accused of human rights abuses and it was difficult to even mention the war while writing from Sri Lanka.

It makes saving trees seem trivial yet one of the most important things Sri Lanka taught me was how seriously other countries take the environment. It is easy to assume that we in the developed world care more about the environment because we have the time and the resources. Yet recent surveys have shown this is not the case.

It is countries like Sri Lanka with its beautiful forests and high levels of biodiversity that has so much to lose. Not just Professor Mohan Munasinghe, the co-winner of the nobel peace prize with Al Gore last year, but many other Sri Lankans are concerned about the future of their country if development continues to ignore environmental concerns like deforestation.

It is organisations like Ruk Raks, who are fighting to plant more trees not only to slow climate change but maintain biodiversity when the world does warm up, that are trying to protect the environment for future generations

I might not have got to the bottom of Buddhism but I'm pretty sure that must be good karma.