The cultural dimension of Poson

Colombo, Sri Lanka -- This week, Sri Lankan Buddhists celebrate Poson Poya. It is no exaggeration to say that the Lankan culture and Poson Poya are synonymous. History says it was on a Poson Poya day that Arahath Mahinda, son of the great King Asoka of India, and a group of missionaries came to Sri Lanka to spread the word of the Buddha. 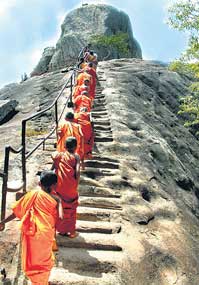 Asoka was a harsh king. He was known among his subjects as “Chandasoka”, meaning “cruel Asoka”, but after embracing Buddhism he came to be known as “Dharmasoka”. He accepted the new religion that was fast spreading in his native India and wished to propagate the Buddha Dhamma in the island adjacent to his country.

Arahath Mahinda, after putting King Devanampiyatissa to the test with a series of questions and satisfying himself on the matter of the king’s wisdom, then introduced the Buddhist philosophy to Sri Lanka. This year’s Poson marks the 2,311th year of that historic event.

The Sinhala king accepted Buddhism, and the people of the country followed. This acceptance resulted in a cultural revolution, coloured by the teachings of the great teacher, Lord Buddha. The Sinhala culture became a Buddhist culture, and so it has remained ever since. The meeting of King Devanampiyatissa and Arahath Mihindu at Mihintale (the present Missaka Pawwa), was a defining moment in our history.

From that point on, the kings of Sri Lanka took the lead in religious matters, and their governance was based on ethics drawn from Buddhism. Foreign invasions over the centuries failed to erase the cultural or religious identity of the Sinhala Buddhists. It is Buddhism that has preserved this country’s cultural identity. Anyone who has embraced the Sri Lankan way of life would instinctively respect Buddhist values, regardless of ethnic or religious differences.

Foreign invasions and incursions have, to some extent, modified the cultural identity of the Sinhala Buddhists, especially in maritime areas where, since the 15th century, the Portuguese, the Dutch and the British ways of life have influenced the local culture.

Sinhala customs have their roots in Buddhism. The Sri Lankan Constitution requires that the head of state be a Buddhist. With that first Poson, 2,311 years ago, Buddhism and the Sinhala culture became one.

The Poson experience has led Sri Lankans to believe that the Lord Buddha chose Lanka as the place that would preserve his teachings. Lankans believe the nation was reborn on that august day.

Non-Buddhists appreciative of the Buddhist way of thinking would gain insights into the country’s ethnic, cultural and religious character. This awareness leads to a deeper understanding of the country. It is only through such an understanding that all communities in Sri Lanka can live in peace and harmony.

Poson is a good opportunity to restore the inter-religious, inter-ethnic harmony that the peace-loving have been struggling to recover for close to three decades.