KANDY, Sri Lanka -- A cannon booms and the crack of a dozen whips pierce the warm night. The colorful, pulsating Esala Perahera procession has begun. 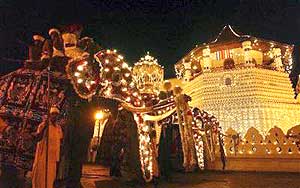 Its soundtrack is a cacophony of percussionists pounding traditional drums, dancers clanging finger cymbals and the rhythmic thumping of mock sword battles.

The 11-day-long celebration in the central city of Kandy shines like Mardi Gras and rocks like Carnival, but without the decadence, liquor or women in skimpy outfits.

It is deeply rooted in Buddhist traditions and is a major symbol of nationalism for the country's ethnic Sinhalese majority, stoking memories of the kings who once ruled this teardrop-shaped island off the southern tip of India.

The centerpiece of the celebration is the Sacred Tooth Relic, which tradition holds is one of the few remnants of the Buddha to survive his cremation more than 2,500 years ago. The tooth was smuggled from India to Sri Lanka nearly 1,700 years ago to protect it from an angry king who wanted to destroy it, according to legend.

The modern perahera descended from the royal custom of parading the closely guarded tooth through the streets once a year to give the public a glimpse of the holy relic.

The relic itself is no longer taken out of the temple in Kandy where it is kept; it is considered far too precious. But one elephant in the parade does carry a replica of the gold casket that contains it.

Thought to hold special powers, including the ability to bring rain, the tooth became the symbol of sovereignty over Sri Lanka. Whoever possessed it was considered the nation's legitimate ruler.

As new dynasties took power, the tooth traveled with them to their new capitals. Ruins of temples built to house the tooth are scattered across the country.

When foreign invaders tried to capture the relic, monks spirited it to safety in remote villages and hid it in plain caskets and even a millstone until the invaders were repelled.

The relic is such a powerful symbol that when suspected ethnic Tamil rebels—who continue to fight a civil war here—wanted to strike at the heart of Sinhalese nationalism, they bombed the current Temple of the Tooth in Kandy.

That 1998 attack killed 17 people. The next day, the government outlawed the Tamil Tiger group. With a flare-up in the quarter-century war over the past 2 1/2 years, security for the perahera procession has been tightened, the parade route cordoned off and everyone entering searched.

The procession grows longer and increasingly elaborate over the course of the festival's 11 days. The dates of the festival are set according to the lunar calendar. It will run from Aug. 7-17 this year.

Few foreign tourists have attended the perahera in recent years, but for its crowning final night, Sri Lankans begin staking out seats along the parade route at 6 a.m.—14 hours before the temple's cannon marks the start.

The parade is led by a procession of men cracking whips. Behind them march a group of men spinning baskets of fire attached by 6-foot-long chains to metal bands on their heads. Some lie on the pavement and contort theirs neck to swing the fire in circles around their bodies.

Other men toss large circles of iron, akin to huge bicycle wheels with flames at the end of the spokes, 20 feet into the air.

But the real stars are the elephants, dozens and dozens of them, each in unique, elaborate costumes. Some wear robes of deep red or purple draped over their backs with gem-encrusted masks covering their heads and ears and flowing down their trunks.

Some wear outfits woven with scores of tiny lights, with gold caps on the end of their trunks.

Some carry important Buddhist monks and temple luminaries on their backs. Others carry sacred artifacts in pagodas.

Tourists who want a good view can spend the day guarding a patch of sidewalk, rent a reserved chair in front of some hotels and restaurants or book a room at the historically shabby Queens hotel with a balcony or a window overlooking the route.

The reserved seats are helpful, especially if one wants the freedom to come and go during the more than four-hour parade.

But the hotel is by far the most comfortable option. And with the sale of alcohol officially banned during the festivities, some room service waiters are willing to sneak a few bottles of beer to guests watching from their rooms.

THE ESALA PERAHERA: Information on dates of perahera and other events around Sri Lanka at the Sri Lanka Tourist Board Web site, http://www.srilankatourism.org. The festival runs Aug. 7-17.

GETTING THERE: Sri Lankan Airlines, Emirates and many other carriers fly to Colombo. From there, a taxi, bus or train can take you to Kandy, about four hours outside the capital.

ACCOMMODATIONS: The Queens hotel is just across the street from the Temple of the Tooth and sits along the procession's route. A room facing the route—and one with a balcony—is a little more costly during the festival, but well worth it, 011-94-81-223-3026, http://www.queenshotel.lk As of mid-July, the hotel had rooms available for most nights except Aug. 15-16. Rates for doubles with a view were $185.

OTHER ACTIVITIES: Sri Lanka is filled with historic ruins, renowned beaches, tea estates and national parks with elephants and leopards. With the civil war raging many tourists have stayed away. The war is largely confined to the northern section of the country—far from many tourists areas—though suspected rebels routinely bomb buses and train stations in the south.