The Buddha visits His birth place

Colombo, Sri Lanka -- It was on a Medin Full Moon Poya day that Siddhartha Gauthama Buddha first visited his birth place, Kapilawattupura, the Kingdom of His father, King Suddhodana. 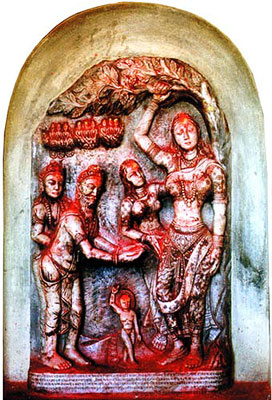 For Sri Lankans this day is of special significance because it is on this day that most number of pilgrims climb Samanala Kanda to worship Sri Pada – the sacred Foot print of the Enlightened One.

During a period of seven years after the renunciation of prince Siddhartha his father, King Suddhodana repeatedly received heart-rendering news about him. During this period of seven long years the king heard nothing happy about his son.

Whatever news that came to him was doleful, miserable and mingled with grief. News came to the king that his son was suffering and at last, he received a message that prince Siddhartha was dead. Some bones were produced to him in proof of the death of his son but the king did not believe in such news on the contention that the members of his lineage do not die before completing the full span of life.

At last, after seven long years the king received that heartening news that his son had attained Buddhahood and was sojourning at Veluvanaramaya in Rajagahanuwara, the first ever monastery built for the Exalted One by King Bimbisara.

The king who was anxious to see his noble son, sent nine courtiers each with a large following on nine successive occasions to invite the Enlightened One to Kapilawattupura. However, contrary to the king’s expectations all of them attained Arahantship and joined the Order. They did not convey the message to the Buddha as Arahants are indifferent to worldly affairs. At last, the king sent his minister, Kaludai who was prince Siddhartha’s playmate. Minister Kaludai undertook to make the invitation on condition that he would be allowed to enter the Order. On hearing the Dhamma he too attained Arahantship and entered the Order but unlike the others he conveyed the message to the Buddha and persuaded Him to visit his father who was old and anxious to see Him after these long years.

Attended by a large retinue the Exalted One journeyed all the way from Rajagaha to Kapilawattu pura preaching Dhamma on the way. He took two months to reach the destination. The king arranged for the Enlightened One and the retinue to stay

Some of the Sakyans who were conceited made only the young ones to pay obeisance and Buddha had to exhibit Yama Maha Pelahera- the twin miracle in the sky. This is the power said to have been possessed only by the Buddha to cause a stream of fire to issue from one part of His body and a stream of water from the other at one and the same time which is a power to issue such streams together from the eyes, ears and nostrils which was the result of His having accomplished “Thejokasina” and “Apokasina” The arrogant Sakyans having seen the wonderful sight paid Him obeisance regardless of their age and status. There upon the Buddha came down and sat on the seat prepared for Him. There was heavy rain but only those who wished got wet and others were not wetted. The Exalted One preached Vessantara Jathakaya in order to show that similar incidents had taken place in previous births. The Sakyans listened to Him attentively.

On the following day as no one had invited for the noonday meal the Buddha went from house to house in the streets of Kapilawattu pura His disciples followed Him with bowls in their hands. The king was informed that his own son was begging alms in the streets. He never expected such an incident to take place and rushed to the place himself and enquired most humbly, as to why the Enlightened One was disgracing him and his lineage, “Sakyans had never gone from house to house seeking alms” the king said. The Exalted One said “The royal lineage is yours, O King; mine is the Buddha lineage” and added that it is proper for members of His lineage to seek alms from houses. Buddha advised the king to be alert and heedful and to live a righteous life. “The righteous live happily in this life and in the next”

The king was intelligent and virtuous enough to realize the truth and had attained “Sowan”, the first stage of Sainthood. Soon the king took the Buddha’s bowl to his hands and conducted Him and His disciples to the palace where he served all of them with food. After meals He preached Dhamma listening to which king Suddhodana attained “Sakardagami”- once returner or the second stage of Sainthood. Queen Maha Prajapathie Gothami attained “Sowan”, the first stage of Sainthood. Later, the king attained “Anagami” never returner after listening to Dhammapala Jathakaya preached by the Exalted One On his deathbed he heard Dharma from the Thathagatha and attained Arahantship

When all but princess Yasodhara went to pay reverence to the Buddha when He visited the royal palace inquiries were made from her as to why she did not pay reverence to the Exalted One. The princess said that the Enlightened One would Himself come to her if there was any virtue in her and that she would pay reverence when He came to her presence. The Enlightened One accompanied by His two chief disciples and the king entered princess Yasodhara’s chamber. “The princess may reverence the Thathagatha as she wishes,” the Buddha said. Immediately she clasped His ankles and placing her head on His feet reverenced Him bathing His feet with tears.

King Suddhodana praised his daughter-in –law for her faith she had towards the Enlightened One. “She started to wear yellow robes when she heard that you were wearing yellow robes and she resorted to one meal a day. She refrained from comfortable beddings. She even did not look at the messengers sent by her relatives offering her all comforts. She is so virtuous,” the king said. Buddha cited Channa Kinnara Jatakaya to show how she had protected him in previous births. She entered the Order with Queen Maha Prajapathie Gothami and later attained Arahantship.

Prince Nanda was prince Siddhartha’s stepbrother and the son of Queen Maha Prajapathie Gothami and king Suddhodana. He was getting ready to celebrate his consecration ceremony, marriage ceremony and the house-warming ceremony on the second day after the visit of the Buddha. He was to get married to the pretty princess, Janapada Kalyani. Buddha with His divine eye saw that prince Nanda possessed the virtues of attaining Sainthood.  He gave His bowl and the prince had to follow the Buddha although with reluctance. He was deeply moved by the worlds of the princess Janapada Kalyani and was constantly thinking of her. The Exalted One but he was bound to respect the Buddha especially because He was his elder brother. Reading his thoughts the Buddha devised a means to set him on the correct path. On the way he was shown a scorched she monkey clinging to a burnt stump. Then he was taken to the heaven where celestial nymphs were shown to him. He was fascinated by the celestial nymphs so much that he compared his fiancée to the old she monkey. When questioned as to whether he liked to have the celestial nymphs he replied that he liked to have them. The Enlightened One advised him to strive on with diligence to possess the nymphs. However, the other monks ridiculed comparing him to a “Hireling”. He was ashamed of his futile motives and by striving diligently attained Arahantship.

On the seventh day after the arrival of the Exalted One in Kapilawattu pura princess Yasodhara pointed to the Buddha who was in the courtyard and told her son, Rahula that the great ascetic of majestic appearance was his father. She requested him to go and ask for his inheritance. Young prince Rahula ran to the Buddha and felt that even His shadow was pleasing. After the mid day meal he followed the Buddha. No one prevented him from following the Buddha. He was asking for his inheritance as his mother requested him to do. The Enlightened One requested Venerable Saripuutta Maha Thera to ordain prince Rahula saying that He should give prince Rahula the Eightfold Noble wealth, which He received at the foot of the Bodhi tree. Prince Rahula was only seven years of age at the time when he was admitted into the Order.

King Suddhodana was deeply moved when his grand son too left the palace. He came to the Buddha and made a request not to ordain any child without the consent of the parents.    This request was granted.

Buddha’s visit to Kapilawattupura was quite beneficial to his maternal as well as paternal relatives. The most significant relative of Buddha who was converted consequent to Buddha’s visit to Kapilawattupura was Venerable Ananda. He was the closest associate of the Buddha having ministered to all His needs acting as His Agra Upastayake (Chief Attendant) As he possessed a powerful retentive memory, and as he had the rare privilege of listening to all discourses of the Buddha he was later appointed the “Treasurer of the Dhamma (Dhamma Bhandagarika) Sakya princes Anuruddha, Bhaddhiya, Bhagu, Kimbila and Devadatta too entered the Order. Devadatta who was the son of King Suppabuddha is famous for evil acts although he was prince Siddhartha’s brother–in–law.

For Sri Lankans this is the peak period of Sri Pada pilgrimage season, which ends in two months hence on Vesak Full Moon poya day.