Colombo, Sri Lanka -- There passed away 140 years ago to be precise on July 8, 1833, a Buddhist prelate whose services to his religion were inestimable and his contribution to national culture was outstanding. He was Mahaddama Rajadhi Rajaguru Gnanavimala Tissa, the founder of the Amarapura Nikaya. 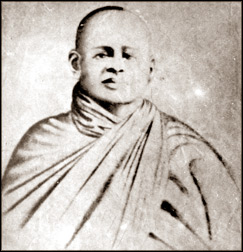 << Sri Gnanavimala Tissa Mahanayaka Thera
He was born in the year 1766 in Mahakarawa a hamlet of Velitota (Balapitiya). He was the eldest son of Carlo de Silva Veda Arachchi and Madalena Hamine. He had his early education under his father’s brother, Piriappu Gainnanse of the Ambagahapitiya Temple.

Background
This temple was originally “Walauwa” which was donated by its owner to Appu Ganinnanse, a brother of Piriappu Ganninnanse. During this period Velitota Kosgoda area was studded with Walauwas belonging mostly to Mudaliyars of the Mahabadde which was the chief source of revenue. Some of these Mudaliyars were stationed at distant places like Colombo, Negombo, Dadalle and Matara in connection with their official duties in the Mahabadde service.

The absentee owners sometimes donated their vacant Walauwas to Ganinnanses to be used for religious and educational purposes. In Sri Lanka, particularly in the maritime provinces, Buddhism reached its nadir in the 17th and 18th Centuries, the decline having really commenced in the latter half of the 16th Century. Dharmapala the last Sinhala King who held sway over the coastal belt renounced his ancestral faith and bequeathed his kingdom by his last will to the King of Portugal in the year 1597. It was by deceitful means that the Portuguese obtained this donation. The unfortunate monarch lived in Colombo to protect himself against the onslaughts of his uncle Mayadunna and his son Rajasingha I.

The Portuguese in their zeal to convert heathers to their religion perpetrated excesses and cruelties without limits on the helpless Sinhala Buddhists. Their ancient temples were razed to the ground and the practice of their ancestral religion was made an offence and punished with utmost severity. Under such repression the Buddhists were cowed down and left helpless.

But this sombre picture was relieved by some bright spots where the people fiercely resisted this religious persecution and continued to practise their ancestral faith, though not too openly. Such places were Matara, Dadalla, Velitota and Kosgoda. Under the Dutch the position of the Buddhists improved considerably, till, among other disabilities the rank of Mudaliyars was not conferred on a person unless he was baptised. That deprivation prevailed even during the early British period.

During the last two decades of the 18th Century the Chief Sangha Nayaka was the Venerable Bowala Dhammananda of Matara. He was a pious and erudite monk. His influence over the people of the Matara District was unrivalled. It was the power of this liberal minded monk that the Governor, Maitland, sought to break by devious methods-his attempts signally failed.

Bowala Nayaka Thera was a loyal adherent of the Ven. Veliwita Saranankara Sangharaja of Kandy. He was also a supporter of the Sinhalese King. He paid annual visits to Kandy to pay his obeisance to the Sangharaja. When he was returning to Matara after one such visit he went to the Ambagahapitiya temple to obtain rest and shelter for the night. Piriappu Ganinnanse who was a stranger to the Nayaka Thera entertained him with great respect and hospitality.

At this time the Nayaka Thera was suffering from a persistent and painful skin disease. Piriappu Ganinnanse, who was a proficient skin specialist, on noticing the condition of the Nayaka Thera offered to cure the ailment within two weeks. The Nayaka Thera accepted the offer with alacrity and commenced to take the treatment.

Within a matter of a few days the painful disease disappeared. The Nayaka Thera was greatly thrilled by the cure and offered to render any assistance to the benefactor required. The Ganinnanse informed the Nayaka Thera that if he was prepared to take his nephew, who was later to become the illustrious Gnanawimala, to Malwatte and got him admitted to the Sangha there, he would be very happy.

Bowala Nayaka Thera readily agreed to comply with his wish. On his next visit to Kandy the Nayaka Thera took the boy there and entrusted him to the Sangharaja for a number of years. Later the Sangharaja admitted the boy as his pupil and being impressed by his great intelligence gave him the significant name of Gnanawimala.

The new Samanera continued to receive his education at the Malwatte Temple. The Sangharaja was greatly pleased with his progress and caused several Ola books to be written for his studies. Those books which state that they were caused to be written by the Sangharaja for the use of the young Samanera are still available in the Ambagahapitiya Temple Library.

When Gnanawimala reached his 20th year and asked for Upasampada, the higher ordination, his tutor, the Sangharaja had passed away and the authorities then in power at Malwatte turned down his request on the plea that the then King Rajadhi Rajasinghe had made an order restricting the right of obtaining higher ordination to the members of a particular caste. However, they expressed their willingness to grant him a truncated form of ordination.
Malwatte Hamuduruwo

This offer he firmly rejected and returned to Ambagahapitiya Temple. There he gathered a number of Samanera pupils to whom he imparted religious instruction. He became very popular there and came to be known as “Malwatte Hamuduruwo”. All the prominent people in the district gathered around him and treated him with veneration.

These dayakas included two powerful Madaliyars, namely, the Sahabandu brothers. Gnanawimala Samanera impressed on his dayakas that without the presence of monks who had obtained the higher ordination their religious activities could not be fully realised. Therefore he communicated to them his desire to proceed to Siam with a number of his pupils for the purpose of obtaining higher ordination.

The two Sahabandu Mudaliyars and the other prominent dayakayas undertook to bear the expenses of the mission and make the necessary arrangements for the journey.

At this stage, when all the necessary arrangements were almost complete, a message was received by Gnanawimala Samanera from the Malwatte authorities informing him of their willingness to confer on him the full higher ordination according to tradition. This he was not prepared to accept.

The journey
In the year 1798 Gnanawimala with five other Samaneras and three laymen left Galle in a Dutch sailing ship to proceed to Siam via the South Indian Port of Nagapatnam. To go to Siam they had first to disembark at Hansawathy (Pegu) in Burma. At Nagapatam the ship’s officers took in all the provisions and water sufficient to last the journey up to Hansawathy.

The ship then set sail and after a number of days it suddenly stopped. The vessel was calm and would not move for want of winds. It remained so for over ten days. The provisions and the water were running out. The sailors were alarmed because a such a situation they had never experienced before.

When there was no improvement in the situation the ship’s officers and the men who were baffled by this strange experience began to gossip among themselves that the cause of their misfortune was due to the presence of the heathen priests. Gnanawimala who had a knowledge of the Dutch language understood what was being discussed. He then approached the Captain and told him that it was not due to his and his companions presence but that the ship was not moving. He who had a profound knowledge of astrology studied the position of the stars in the firmament.

He, however, predicted that a few days later, at a particular hour, a favourable wind would develop from the South which would enable them to continue the voyage. He further told him that he was at liberty to deal with them in anyway he wished if the prediction did not come to pass.

At the same time Gnanawimala Samanera fortified his prediction by reciting the following ‘Seth kavi invoking the Blessings of God Kataragama.

The fateful day dawned. Minutes were ticking away bringing nearer and nearer the hour of destine. Everyone on board had their eyes glued to the South realising that if the monk’s prediction proved to be correct the safety of the ship was assured. At the crucial hour a gentle breeze wafted from the South developing into a strong wind. The sails bellowed, the ship began to move slowly but steadily in the direction of its destination, Hansawathy.

Everyone was delirious with joy. Thereafter the monk received high acclaim from all the officers and men. The Captain inquired of him in detail the purpose of his visit to Siam. When he was told that he was going there in order to obtain the high ordination for himself and his pupils, the Captain informed the monk that at that time Buddhism was a more flourishing condition in Amarapura than Siam. He also assured the monk that through the Dutch Consul at Hansawathy he would be able to make all necessary arrangements to reach the Burmese capital.

The monk agreed to the suggestion of the Captain and the latter, through the Consul, obtained the necessary introductions to the religious and administrative authorities in Amarapura.

The mission reached Amarapura and was received by the Emperor who gave the necessary instructions to the Venerable Gnanathiwansa, the Sangharaja, he grant the wishes of Gnanawimala Samanera. The members of the mission studied under the Sangharaja for two years. The Samaneras were ordained in the year 1801 with all pomp and ceremony. Gnanawimala Samanera was taken to the Emperor’s Palace in the Royal Palanquin. The other Samaneras followed him in ordinary palanquins.

The Emperor and Empress presented a beautiful silken brocade robe to Gnanawimala Samanera which is still preserved in Ambagahapitiya. The same night the six Samaneras were conferred the higher ordination by the Sangharaja in “Suvani Guha” Seemawa. The members of the mission, except the Ven. Dhammadare, returned to Sri Lanka in the year 1802 with three Burmese monks and founded the Amarapura Nikaya the same year. The Ven. Dhammadara who stayed behind in Burma with the permission of his teacher was later crowned as the King of Assam.

Ven. Gnanawimala Thera visited Amarapura again in the year 1807 in the company of his pupil Ratnapala Samanera and went through a further course of studies under the Sangharaja for two years. On that occasion he was conferred the title Mahadhamma Rajadi Rajaguru by the Emperor.

Ratnapala disrobed himself in Burma and became a great industrialist in Calcutta. He died a millionaire in the year 1856. He also collaborated with Jam Princep in deciphering the Asoka inscriptions.

Ven. Rajaguru Thera and his pupils worked with the greatest zeal in propagating the religion in all parts of the country. It is noteworthy that all the older Buddhist temples in Colombo were set up by his pupillary successors.

But for his efforts the majority of the Sinhalese would not have been Buddhists today.

-------
This article was originally written by Justice of the Supreme Court K.D. de Silva in 1973. Reprinted from the booklet published by Mrs K.D. de Silva
TOP