The meeting on the summit: A turning point 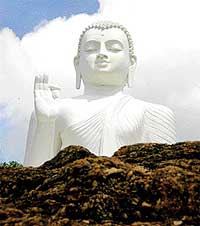 In the aftermath of the third Great convention of Buddhism, Emperor Asoka despatched Buddhist delegations to the neighbouring states to propagate Buddhism. In pursuance of this venture, the delegation he chose to send to Sri Lanka was headed by none other than his son Mahinda who had attained the sublime spiritual state of Arahat hood. The rest of this delegation comprised the four Buddhist monks Ittiya, Uttiya, Sambala and Bhaddasala and novice monk Sumana and the acolyte Bhanduka, a devout Buddhist layman.

This seven member Buddhist delegation appeared on the summit of the mountain of Missakapauva, now known as Mihintale, close to Anuradhapura on the full moon day of the lunar month of 'Poson'.

The Arahat Mahinda, who in every respect was superior to the Sinhala King, saw the monarch as a hunter chasing a deer. In order to attract his attention Arahat Mahinda addressed him as, "Tissa".

The King was surprised at this unexpected curt form of address coming from the lonely woods. He turned towards the direction of the voice, and was astonished to see a dignified monk in yellow robes - a spectacle which he had never seen.

The King reverently inquired as to who he was. Then the Arahat politely replied and introduced themselves. (Samana Mayam...)

The King wished to know how they arrived on that solitary spot. The Arahat Mahinda replied that they came neither by water nor by land. The intelligent King inferred that they had come by air. The delighted King laid aside his weapons and sat composedly together with his retinue to hear the Dhamma.

The Venerable teacher, before expounding (explaining) the profound teachings, tested the intelligence of the cultured King by asking some simple, but subtle questions from him. The King answered them intelligently. Thereupon Arahat Mahinda delivered the 'Cula Hatthipadopama Sutta with the fundamental tenets of Buddhism.

Immediately the King embraced the new teaching and became a follower of the Buddha. His retinue followed suit. After the departure of the King and his followers, the lay disciple Bhanduka was granted the lesser (Pabbajja) and the higher ordination (upasampada) by the Sangha. Soon after, he attained Arahatship. Thus Bhanduka became the first Arahat in Sri Lanka.Later, as instructed by Arahat Mahinda, Sumana Samanera, standing on the summit of the present Aradhanagala, announced that it was time to hear the Dhamma. Devas and people in Lanka assembled in large numbers and Arahat Mahinda preached to them on spiritual calm.

These first penniless missionaries who visited this island with the purest of intentions, mainly to work for our moral welfare, gave us transcendental(going beyond the limits of human knowledge,experience or reason) treasures.

A knowledge of Buddhism enabled people to do away with a host of misconceptions, wrong notions and harmful rituals that they clung to, and diverted them to practise the correct methods of worship and reverence, observing religious rites such as paying obeisance to the Triple Gem, paying obeisance to the Sacred Bo Tree, chanting of pirit, bestowal of merits on deities and bestowal of merits on kith and kin who have passed away.

People learnt to ignore various differences such as caste, creed and religion. They began to admire and worship the bhikkhus, bhikkhunis, upasakas and upasikas. With the introduction of Buddhism to Lanka the isle of the Sinhala was converted to a Dhammadeepa-isle of truth.

Buddhism was recognised as the state religion and has been practised with great reverence until today. This significant meeting on the summit led to the political, intellectual and economic development of the Sinhala people and they are deeply indebted to Buddhism for the flourishing cultural and religious heritage of this land.