Galaha, Sri Lanka -- Sri Lanka President Mahinda Rajapaksa today expressed his appreciation to the Buddhist monks for the guidance and blessings he received from the Maha Sanga during the liberation of the country from terrorism. 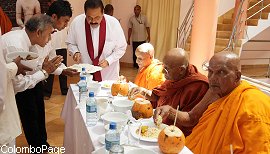 President Rajapaksa made these remarks at the opening ceremony of a new hospital and a nursing home for the Buddhist monks today at Galaha in Sri Lanka's hill capital Kandy.

He planted a tree to mark the occasion and presented a memento to the parents of Ven. Deltota Dammajithi thero who donated the land for the hospital. He then admitted the first patient monk to the hospital built at a cost of 50 million rupees.

The President said similar centers to treat sick monks will be established at provincial level.