Colombo, Sri Lanka -- Sri Lanka is touted as being a great Buddhist nation. Driving around Sri Lanka the only markers surpassing the sites of all the temples and dagobas are the posters of the president. Every “patriot” sees the need to prove their credentials by showing that they are the only true Sinhala Buddhists. 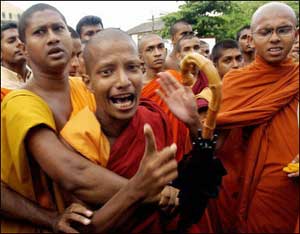 At the junction some of us were reminiscing about the days of our youth, when relative peace, harmony and coexistence reigned in our resplendent island. As youth, we excitedly awaited each religious festival and the celebrations that followed, no matter which religion.

At Vesak, not only Buddhists, but Hindus, Christians, and Muslims poured into the streets and walked for hours enjoying the many pandals, dansalas, and other adornments, and marveled at the many stories of the Lord Buddha and his teachings. At Ramadan, we were assured of platters of buriyani, and other delicacies delivered to our door by neighbours, while we admired and respected the 40 day fast all Muslims honoured prior to this day of feasting. Thai pongal was celebrated with a sense of peace and harmony, and everyone arose at dawn to join their Hindu neighbours lighting of the fire and the sweet smell of chakra pongal cooking on the open hearth, where kids tried hard not to step on the drawings made on the floor around the fire by the family the previous day. At Christmas, we all celebrated, handing each other gifts, kids looking forward to a visit by Santa Claus, the beautifully adorned Christmas trees even in Buddhist households, the chiming of the bells at midnight and all the fire crackers going off well into the nights.

So who spoilt all this fun, peace and harmony among all Sri Lankans? Who are the troublemakers, and perpetrators of this crime of disturbing the peace, like the gringe who stole Christmas?

The general consensus at the junction is that none other than our dastardly politicians backed by a few Buddhists are responsible for this. It is they who should be taken to task for destroying the peace in our country by injecting their vile and often disturbing rhetoric about protecting the dhamma from the rest of us.  Starting with SWRD we have gone down a path of no return.

All these politicians, backed by trouble making priests led the people astray with their extreme Buddhist/Sinhala rhetoric. We remember the days when the pious Buddhist clergy walked to get their midday danne wearing no slippers, head shaved in humbleness, carrying a makeshift umbrella, clutching the paatheray. So where have they all gone?

Today’s Buddhist priests have grown hair and ride in Pajero’s. They are too busy politicizing everything, and hand in hand with the politicians they prey on the people with disturbing radicalism. Has anyone driven past the university and noticed the “look” of the day of the priests attending school? What is even more disturbing is that the Nayake Thero’s and other leaders of this peaceful dhamma have and do remain silent. One priest even turned up at an acupuncture clinic to have  treatment.

There are even priests with darker records. How come we never hear of the Sangha issuing statements calling for the priests to be disrobed? On December 6th a Catholic Church, Our Lady Rosa Mystica in Croos Watta, Ja Ela was attacked and the priest’s car was burned. Again no response.

At the junction we decided that as Sri Lankans we want Buddhist priests to get out of politics and to stop giving Buddhism and other Buddhists a bad name. Priests should also follow the Dhamma. Those priests who disregard the basic guidelines and engage in business, crime, misconduct or fomenting communal hatred should be dealt with.

Anti-conversion laws should not be imposed, rather we should allow people to choose their own religion, faith is not something that can be bought.

In our humble opinion, even Christians, Hindus and other religious people could also be called Buddhists if they live as decent peace loving, charitable people. After all Buddhism is and should be a way of life. The Lord Buddha preached on how we should conduct ourselves from day to day.

So hand Buddhism back to the peaceful and humble priests in the aramayas, the priests who take the Lord Buddha’s words seriously and preach the basic precepts of Budhism. Hand it back to the true devotees who actually live according to the teachings of the Buddha. Most of all, hand the country back to those who believe in peace and harmony and equality and freedom for ALL.