Mihintale glows with sanctity at Poson

Colombo, Sri Lanka -- With the spiritual fragrance of the Thrice Blessed Day still fresh in their hearts and minds, Buddhists in our country are now preparing to usher in yet another day of religious significance, unique to our Motherland. 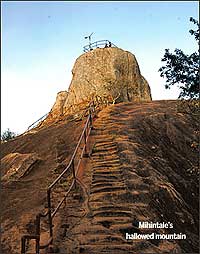 Perhaps, if not for the events that took place on this hallowed day in June long ago, Vesak or the Thrice Blessed Day may have not been so significant to the people of this land, as it is today.

The month of June unfolds like a blossom, the story of the birth of Buddhism in this land, which took place thousand of years ago on a Poson Full Moon Poya Day.

The Enlightened One's hallowed teachings, the Dhamma was introduced to this little island nation by none other than a supremely enlightened Buddhist Monk, Arahath Mahinda Thera, son of the Great Mauryan Emperor of India, King Asoka. Arahat Mahinda, the Missionary Prince is said to have alighted on the Sila-peak, which is the northern peak of the Mihintale Mountain during the reign of King Devanampiyatissa (B.C. 247-207).

It was on this summit that the Arahat confronted the famous deer hunter who was pursuing a stag to the top of the hill and tested the King's capacity for instruction with a riddle, pointing to a mango tree growing nearby.

By now even non-Buddhists are familiar with the dialogue that took place between the King and Arahat Mahinda on that summit and the events that followed to make King Devanampiyatissa his first convert.

Thereafter Buddhism spread far and wide in this land with royal patronage during that time. Today it continues to do so, under State patronage.

With the dawn of Poson, Mihintale becomes the centre of attraction today not only because Arahat Mahinda first set foot on this place and succeed to convert the people of this land to Buddhism, but also because the sacred relics of the Buddha, (on His instructions given prior to Parinibbhana) were brought over from India and kept here originally until suitable structures were raised elsewhere to enshrine them.

It is also the place where the relics of the Missionary Prince - Mahinda were also eventually enshrined after He passed away. So, these three significant factors and the colossal, stupendous edifices constructed by the ancient kings during different eras, add to the grandeur and glory of Mihintale during the month of Poson.

The cradle of Buddhism, Mihintale, steeped in history becomes a hive of religious activity during the Poson season. The gigantic Ambasthala Thupa or dagaba will be brightly illuminated lighting the way for the thousand of devotees who will flock to this place on Poson Poya Day, which falls on June 25 this year.

Among the many antiquities to be seen at the Mihintale sacred hill and surrounding area, the most fascinating is the ancient stairway comprising 1,840 worn out stone steps that seem to be reaching almost into the azure sky when looked at from the base of the mountain.

Many of you may have ascended these stone steps to reach the summit with reverent awe.There are many historic places to see at Mihintale apart from the Ambasthala Dagaba.

They are the 40-foot Kantaka Cetiya, Stupa built by King Suratissa, the ruins of a Veda Sala (hospital) at the foot of the mountain with a medicinal bath (beheth oruwa) in the shape of a human strongly resembling a sarcophagus, stone inscriptions or the inscribed slabs of Mahinda IV (A.D. 956-972) described by Bell as being probably the finest example of a Sinhalese inscription prior to the reign of Nissanka Malla. (It bears a long record of temple regulations and privileges), the famous lion bath, the ruins of the monastery Indi-Katu Vehera, Ran Giri Lena Kanda, and the entrancing Kaludiya Pokuna.

If you have not made a trip to Mihintale, then don't hesitate to do so during the Poson season, especially if you are a Buddhist, because it is then that this magnificent place which is considered to be the cradle of Buddhism could be seen in all its glory and splendour.