Legacy of over 2000 years of Buddhist worship

Colombo, Sri Lanka -- The first copies of the two volumes of the books on the Dalada Maligawa – The Temple of the Sacred Tooth Relic, written by the late Professor Anuradha Seneviratna were presented to President Mahinda Rajapaksa last week by Chairman of Vijitha Yapa Publications Vijitha Yapa. 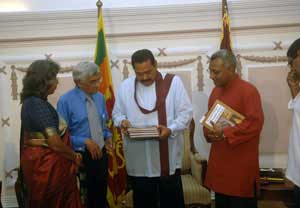 The President said he was happy that Vijitha Yapa Publications has undertaken to print the illustrated editions of Professor Anuradha Seneviratna’s works, not only of the Dalada Maligawa but also of the Kandy Esala Perahera, Dambulla and Gateway to Kandy, with beautiful colour photographs.

He said this will be of tremendous value not only to Sri Lankans but also to foreigners to understand and appreciate our history and culture, and that he would present copies to visiting state dignitaries and also take copies of the books with him overseas on his official visits.

Professor Seneviratna’s two sons, Udayana and Sindhu were also present at the occasion as well as Directors of VYP, Lalana Yapa and Peshan Yapa and the Editor of the publication Siri Almeida.

Copies were also offered to the Sacred Tooth Relic, and presented to the Mahanayake of Asgiriya Chapter and the Anunayaka of the Malwatte Chapter, and to the Diyawadana Nilame, just prior to the commencement of the Perahera.

The Sacred Tooth Relic has played a major role in the political, social and religious life in the past, and it will continue to play the same vital role in the days ahead. Therefore these books are an important contribution to the knowledge of scholars of architecture, history, religion and the culture of Sri Lanka.

Prof Anuradha Seneviratna , a meticulous researcher, read through the galley proofs just prior to his death last year. Volume 1 deals with the History and Architecture of the Temples which housed the Sacred Tooth Relic in various parts of the island, beginning with Anuradhapura where it was initially housed after Princess Hemamala and Prince Danta brought it from the Kalinga country in India in the 4th century AD during the reign of Kirti Sri Meghavanna.

Since then the Sacred Tooth Relic was moved to several places, depending on the security situation in times of war, till it was brought finally to Senkadagalapura (now Kandy) in the 16th century during the reign of Vimaladharmasuriya I and housed in the Sri Dalada Maligawa in Kandy. All these places where the Sacred Tooth Relic was housed, have been described in detail with photographs and illustrations to complement the text.

Volume 2 deals with Rituals, Customs and Ceremonies associated with the Sacred Tooth Relic and the Temple from historical times, which still continue to be performed to this day. These rites, the legacy of over 2000 years of Buddhist worship, provide an unbroken lineage between the past and the present, and their continuation ensures a heritage for the future. Daily rites, weekly rites, monthly rites and yearly rites are dealt with in detail.

Associated with the yearly rites is the Esala Perahära, and this is described in full, with colour photographs to support the text. Professor Anuradha Seneviratna who graduated from Peradeniya University in 1965 obtained his Doctor of Philosophy degree in 1968 from the University of Halle in Germany. He joined the academic staff of the Colombo University in the same year as a Lecturer in Sinhala.

He joined the Peradeniya University in 1973 as Senior Lecturer in Sinhala and served in that capacity until 1984. He was promoted as Associate Professor in the Department of Sinhala in 1984, and served in that position till 1991. In 1991, he was promoted a full Professor and in 1996 as a Senior Professor in which capacity he served till his retirement from this University in February 2004.

He was appointed Senior Fellow of the University of London in 1998 and was the Visiting Professor of Sinhala, Pali and Buddhism for two years. He was awarded the Emeritus Professor status by the University Council on his retirement.