KAMAISHI, Japan -- Amid the grief of finding her mother’s body at a makeshift morgue in this tsunami-ravaged city last March, Fumie Arai took comfort in a small but surprising discovery. Unlike the rest of the muddied body, her mother’s face had been carefully wiped clean. 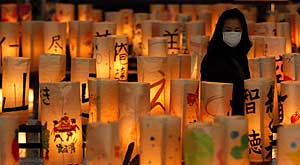 << A memorial in Koriyama, Japan, on Saturday was one of many to mark the March 11, 2011, quake and tsunami. More Photos »
Hiroko Masuike/The New York Times

Atsushi Chiba used Buddhist rituals in caring for nearly 1,000 bodies in Kamaishi. “It's a way to comfort the living,” he said. More Photos »

Mrs. Arai did not know at the time, but the act was the work of a retired undertaker well-versed in the ancient Buddhist rituals of preparing the dead for cremation and burial. The undertaker, Atsushi Chiba, a father of five who cared for almost 1,000 bodies in Kamaishi, has now become an unlikely hero in a community trying to heal its wounds a year after the massive earthquake and tsunami that ravaged much of Japan’s northeastern coast a year ago Sunday.

“I dreaded finding my mother’s body, lying alone on the cold ground among strangers,” Mrs. Arai, 36, said. “When I saw her peaceful, clean face, I knew someone had taken care of her until I arrived. That saved me.”

As Japan marks one year since the quake and tsunami that claimed almost 20,000 lives in the northeastern region of Tohoku, stories like these are being told and retold as mementos of hope even as Japan struggles through what is expected to be an effort lasting decades to rebuild the region.

Mr. Chiba’s story has been immortalized in a best-selling book in Japan, which has sold over 40,000 copies and is in its eleventh printing.

“The dead bodies are the most disturbing aspect of any disaster, and some people might not want to remember,” said the book’s author, Kota Ishii, who spent three months in Kamaishi and its environs in the wake of the disaster, chronicling Mr. Chiba’s work. “But this story is ultimately about how small acts of kindness can bring a little humanity, even in a tragedy that defies all imagination.”

The 30-foot waves that struck Kamaishi shortly after the magnitude 9.0 quake on March 11 spared the white statue of Kannon, the Buddhist goddess of mercy, which looks out to sea from the hills above the city. But the waves destroyed the liveliest parts of the city, the bars and restaurants frequented by the area’s fishermen.

As the black water receded, rescuers entered the city’s devastated streets and started pulling the dead from the rubble, carrying them on trucks to a vacant middle school that had escaped damage. The rundown gymnasium quickly became a large morgue.

Mr. Chiba, in his early 70s, whose home was also spared, raced to the gym on the day after the tsunami to look for friends and family, but was struck by the state of the mounting number of bodies there. Most were still clad in muddy clothes and wrapped in plastic, their rigid limbs jutting out and faces bruised by debris and contorted in agony.

“I thought that if the bodies were left this way, the families who came to claim them wouldn’t be able to bear it,” Mr. Chiba said Thursday in an interview. “Yes, they are dead. But in Japan, we treat the dead with respect, as if they are still alive. It’s a way to comfort the living.”

Mr. Chiba set to work. He became a fixture at the morgue, speaking to the bodies as he prepared them for viewing and then cremation. “You must be so cold and lonely, but your family is going to come for you soon so you’d better think of what you’re going to say to them when they arrive,” he recalled saying.

He also taught city workers at the morgue how to soothe limbs tense with rigor mortis, getting down on his knees and gently massaging them so the bodies looked less contorted. When the relatives of a middle-aged victim sobbed that her corpse looked gaunt, Mr. Chiba asked for some makeup and applied rouge and blush.

Mr. Chiba’s attempts to honor the dead quickly caught on. City workers put together old school desks to make a Buddhist altar. They lay the bodies of couples and of family members together. Each time a body was carried out, workers lined up with heads bowed to pay their last respects.

And at Mr. Chiba’s urging, Kamaishi became one of the only hard-hit communities to cremate all of its dead as called for by Japanese custom, enlisting the help of crematoriums as far as Akita, over 100 miles away.

In all, 888 of Kamaishi’s approximately 40,000 residents are known to have died; 158 more are listed as missing and presumed dead.

The disaster has been a major blow to the already declining fortunes of the city, whose steel industry thrived during the 1960s and 1970s but has been shrinking ever since. The tsunami laid waste to half the city, and a year later, streets in the worst-hit neighborhoods are still lined with the shells of buildings and empty plots.

As the city prepared this weekend for memorials to mark the disaster’s first anniversary, a Buddhist priest paid tribute to Mr. Chiba’s contribution to the city’s emotional recovery.

The priest, Enou Shibasaki, from the Senjuin Temple in the hills overlooking Kamaishi, remembers the change that came over the makeshift morgue as Mr. Chiba and city workers tended to the bodies.

“Whether you are religious or not, mourning for the dead is a fundamental need,” Mr. Shibasaki said. “Mourning starts by taking care of the body. It’s the last you see of your loved one, and you want to remember them as beautiful as they were in life.”