Head monk of Kyoto temple takes Buddhism into the community

Kyoto, Japan -- Climb the stone walkway, stippled with fallen red camellia blossoms, that leads to Kyoto's Honen-in Temple, past a mossy thatched gate and raised platforms of sand combed in tight patterns of waves and chrysanthemums, and you enter a hushed and otherworldly space at the foot of Mount Daimonji. 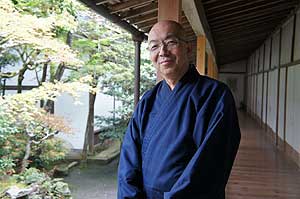 << News photo
Shinsho Kajita, head monk of the Honen-in Temple in Kyoto, has opened the temple's doors wide to the public through concerts, art exhibitions and symposiums. Below: Cellist Mari Fujiwara performs at one such event held last Sunday at the temple. JANE SINGER, COURTESY OF SHINSHO KAJITA

Honen-in's most famous resident is novelist Junichiro Tanizaki, whose ashes reside in the small cemetery. Its second-best-known resident, however, is head monk Shinsho Kajita, 56, whose shaven head, arching brows and constant smile presents a rounded and amiable visual harmony.

In a country where the main function of Buddhist priests is seen as officiating at funeral rites or maintaining family burial rites, Kajita has opened his temple's doors wide to the public.

Under his leadership, Honen-in now hosts more than 100 concerts, art exhibitions, symposiums and guest lectures each year, and Kajita himself gives frequent hourlong talks on Buddhist thought to visitors and parishioners.

The temple is named after Honen, the founder of Jodo Shu, the Pure Land sect of Buddhism. He is said to have visited his disciples there in 1206. "Honen believed that everyone could achieve salvation if they faithfully chanted the nenbutsu, a special chant to Amida Buddha," Kajita explains. "His teachings contradicted those of the reigning elite, who stressed the importance of good works, such as donations to the temple, to ensure your entry to gokuraku (paradise). Honen taught that we shouldn't only ask Buddha to answer our selfish requests, but we should seek to respond to Buddha's wishes for us to demonstrate our faith by chanting nenbutsu."

While Zen and other Buddhist sects prioritize training and practice, including meditation, as necessary for reaching salvation, Jodo Shu adherents believe that "the absolute power of Amida Buddha, not our own strength, will bring us to the Pure Land," Kajita says.

Honen was later exiled to Shikoku and the grounds were abandoned for several centuries until 1680, when Honen-in was established at the site by priests from Chion-in Temple, Jodo Shu's temple headquarters. Honen-in continued as a Jodo Shu affiliate but is now operated as an independent family-run temple.

Kajita's father was head monk at Honen-in while also working as a professor of philosophy at Kobe University, specializing in the works of the German idealist Georg Wilhelm Friedrich Hegel. As the oldest son of a temple priest, Kajita's future career was never in doubt, but that was fine with him, he says. "I liked the idea that just by performing my duties normally, I could make people happy. In business you're expected to come up with new ideas and products, but at a temple you follow the same routine every day. It allows for comfort but also freedom, providing the space for you to think creatively.

"And the examples of my grandfather, who remained at the temple his entire life, and my father, who balanced his priestly duties with an academic career, showed me that the monkhood can accommodate all kinds of people."

After high school, Kajita studied German at Osaka University of Foreign Studies. He explains, "I thought that I should learn more about Christianity and German literature to further my theological studies."

While a student he began to assist his father, who became head monk upon his grandfather's death in 1976. Kajita would awaken daily at 5 a.m. to chant and clean the temple grounds, then he would leave for his university in Osaka. On weekends the student donned priestly garb and handled temple duties.

In 1984, Kajita's father died and he took over as head monk. "I started to consider how to make this a place where we can think about living sustainably with nature," he recalls. "The next year, with the help of an expert birdwatcher, we started the Honen-in Mori no Kyoshitsu (Forest Classroom), which sponsored nature walks or talks by university professors and other specialists once a month."

Today Honen-in Mori no Senta (Friends of the Forest Center), a volunteer group with offices near the temple entrance, continues to sponsor talks and hikes, while it educates children about local flora and fauna.

"The local press started reporting on our nature activities and then I was approached by various artists and musicians, who asked if they could perform in the temple's main hall," he says. Kajita decided that arts events could serve as an ideal conduit for attracting young people and others to the temple and, eventually, a renewed engagement with Buddhism: "A temple's main purpose should be to foster people's encounter with Buddha's wishes and to inspire people to ponder their purpose in life. Yet it's difficult to reach people today. Sightseers stroll about the grounds for just 20 minutes, but concert-goers linger for two or three hours. If they come for an art exhibition they'll also attend to the birds and surrounding natural scenery. This may lead to the desire to learn more about Buddhism."

Kajita points out that many Japanese disavow the necessity of Buddhist belief. "Their families may belong to a local temple in rural areas, but as they disperse to urban areas or even overseas they lose their ties to Buddhism. I think it's important to make a conscious choice to practice a particular religion. We need to provide people with an opportunity to rethink their lives," he says. "Conventional Japanese temple-based Buddhism has mainly involved funeral rites, tourism and praying for specific needs, and people have little opportunity to speak with monks or discuss Buddhism. These events could be a good opportunity for people to start thinking and not just approach Buddhism with the selfish objective of fulfilling particular desires."

The various Honen-in events, which Kajita calls "Honen-in sanga" using a Sanskrit word meaning "community," run the gamut from tea gatherings, print exhibitions and scholarly symposia with titles like 'Tohoku one year after' to Indian table recitals and electronic music concerts. The latter are held each year in July and draw upward of 100 attendees a night. Kajita himself joined an event in March featuring koto and shamisen music, in which he chanted Buddhist sutras with koto accompaniment.

Although Japanese Buddhist monks are not noted for social or political activism, Kajita has recently begun taking on a more visible community role. Over the past few years he organized a series of discussion meetings with local citizen groups — both supporters and opponents — of a plan to allow a Kansai-based firm to build an aquarium in a Kyoto municipal park.

Kajita has expressed his misgivings about the aquarium project, particularly the lack of transparency in planning and exclusion of local opinions, in an article published by the Kyoto Shimbun daily in 2009. "We held meetings of both sides and invited city officials to present their ideas." Although public opinion in Kyoto was mainly against the plan, the aquarium opened nonetheless in March. But Kajita said he was happy to have fostered an exchange of ideas.

"Religion should concern itself with people's problems, and monks shouldn't simply stay in the temple and chant," he says. "Buddhism is not just something we practice in solitude, under ideal conditions. We all need to consider our basic selfishness and come up with new ideas to achieve peace and environmental health."