Tokyo, Japan -- When I was a student, I was only interested in literature and the arts. Then in 1963, a friend took me to a peace march against nuclear weapons. 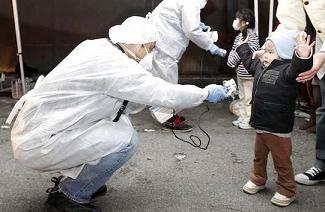 << Officials in protective gear check for signs of radiation on children who are from the evacuation area near the Fukushima Daini nuclear plant in Koriyama, March 13, 2011.

There I met a hibakusha (name given to surviving victims of the atomic bombings of Hiroshima and Nagasaki) who had been exposed to radiation after the dropping of the atomic bomb on Hiroshima. He had returned to Hiroshima from the war front and he told me about a poem he created in which he spoke about leaving for war prepared to die, only to return and be stricken by radiation sickness. He wrote in the poem that he had to hide his condition because of concerns about discrimination and prejudice toward those with illnesses caused by radiation.

I was deeply moved by the internal conflict that he felt and became involved in the peace movement.

The dropping of the atomic bombs on Hiroshima and Nagasaki came at the end of a war that was carried out as national policy.

Last year, the accident at the Fukushima No. 1 nuclear power plant came at the end of promoting nuclear energy that was also considered national policy.

To me, those two occurrences overlap. Neither happened overnight. There is a need for a sense of history that allows us to reflect on why these two phenomena occurred.

If a hasty resumption of operations at the Oi nuclear power plant is allowed, that could lead to a "second Fukushima" accident.

Only after that happens will the people in the nuclear energy village finally give up on their policy of promoting nuclear energy.

Many people have still not reached a point of making a clear decision to move away from nuclear energy. 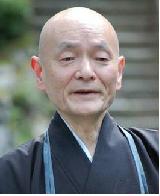 << Rev. Tetsuen Nakajima: One part of the ethics that is taught in Buddhism is to learn about the pain and suffering of others and accept that as one's own. In that sense, people should not pursue their own happiness by having others make sacrifices

However, it would be too late if everyone were to repent only after a second Fukushima accident took place.

The myth about the safety of nuclear energy did not collapse with the Fukushima accident. It had already collapsed when nuclear plants were forced on isolated villages in various parts of Japan because there was the understanding that those plants were dangerous facilities that could not be built close to major urban centers.

Local governments that did accept the nuclear plants had their sense of ethics toward future generations paralyzed by the money that flowed in and had an effect like drugs. In that sense, those governments were victims who were trampled on by the gigantic nuclear energy promotion system.

On the other hand, governors in the greater Kansai region at one time were opposed to resuming operations at the Oi plant on the grounds that damage could extend to their prefectures if an accident happened. However, they quickly changed their attitude to one of virtual approval of resumption.

Their arguments do not carry any weight because there was a failure to comprehensively reconsider the history of nuclear energy that has extended for half a century.

In urban areas that consume huge amounts of electricity, there is a lack of the sense that they are stepping on the toes of those communities that host nuclear plants.

One part of the ethics that is taught in Buddhism is to learn about the pain and suffering of others and accept that as one's own. In that sense, people should not pursue their own happiness by having others make sacrifices.

I believe true discussions on moving away from a dependence on nuclear energy can only begin after there is a comprehensive and fundamental reflection of the entire framework covering energy policy and the social system of mass production and mass consumption.

Tetsuen Nakajima is chief priest of Myotsuji temple in Obama, Fukui Prefecture. He has been involved in providing support to Hiroshima hibakusha as well as the anti-nuclear movement for the Wakasa Bay area in Fukui Prefecture.