Kyoto, Japan -- A group of Buddhists in Japan have formed an organization called “Monks Without Borders,” aiming to unite different Buddhist sects in tackling global issues such as poverty. The new group is similar in name and in concept to organizations already created by doctors and reporters, and the monks recently held their inaugural meeting in the city of Kyoto. 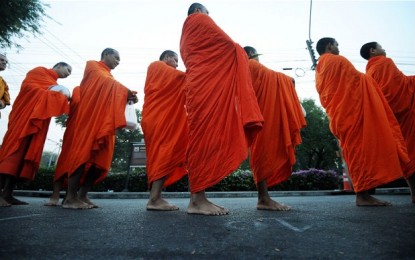 They said that the newly-formed organization aims to transcend the many different schools of Buddhism and unite practitioners around the world with the goal of addressing international problems such as the eradication of poverty, discrimination and other social issues. “Normally, Buddhists do not have interactions with people from different schools, but I think we can unite through Buddhism,” Nakajima said.

“I believe we can go anywhere, like Doctors without Borders.” The organization is making use of the fact that Buddhism is practiced widely across South and East Asia – the formation of the new group is already reportedly supported by monks based in India, Taiwan and Vietnam.

In addition to dealing with global issues, the organization may also impact the image that Buddhism has in Japan, having suffered a dramatic decline in followers and financial support in recent years. A large number of the nation’s 75,000 Buddhist temples are currently believed to be in financial trouble, prompting a raft of innovative projects to attract a new generation of followers, from Buddhist bars to temple fashion shows.

“Monks are generally not good at publicity, even though individually they are active in helping the weak, such as visiting hospitalized patients and natural disaster victims,” said Nakajima. “We hope to strengthen our public relations by setting up a Facebook account.”