Some Buddhist temples now accepting ashes through the mail

Tokyo, Japan -- A small number of Buddhist temples are being accused of blatant commercialism for providing burial services for cremated remains sent through the mail for one affordable and convenient fee. 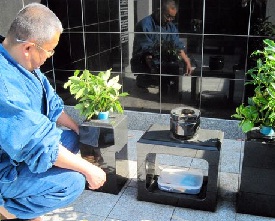 << Nyubutsuji temple in Iyo, Ehime Prefecture, accepts cremated remains through the mail and inters them in a charnel house. (Shigeyori Miyamoto)

Nyubutsuji temple in Iyo, Ehime Prefecture, has been providing such a service since 2011, although it was not officially approved by the city. Normally, temples in Japan only allow worshippers to bury the ashes of family members in purchased graves located on temple grounds.

The temple’s service accepts delivered cremated remains for 55,000 yen ($520) through the mail. A permit to have them buried is also needed. The fee covers storage at the temple's charnel house for a 50-year period. After that time, the ashes will be moved into a joint grave.

According to the temple, those who have used the service so far include women who have been placed in the awkward position of having to care for the ashes of their divorced husbands.

"While the women do not want to become too involved and do not want to spend too much money, they still feel better about having the remains looked after by a temple," said Kosho Yamada, the head priest.

The temple publicizes the service over the Internet and has received 500 requests so far.

However, the Iyo city office recently rejected the temple's request to establish the charnel house on the grounds the practice did not match the religious sentiments held by the public.

The temple filed a lawsuit with the Matsuyama District Court seeking to have the decision overturned, but lost the case in September. The temple is appealing that decision on the grounds the service helps those who have nowhere else to turn.

The district court’s ruling acknowledged that there is a demand for such a service especially due to the nation's declining birthrate.

However, the district court said the service gave the appearance of a commercial venture because the temple emphasized the service’s low cost and simplicity, in which the sender of the ashes does not even have to meet with temple officials.

Elsewhere, other temples have begun to accept ashes through the mail to be interred in joint graves.

One such temple, Kenshoin in Kumagaya, Saitama Prefecture, began the service in October.

The head priest, Eiju Hashimoto, said accepting delivered cremated remains was one way for the temple to open up to the outside world because the declining birthrate means there is not much future in relying on only those who worship at the temple.

Kenji Ishii, a professor of the sociology of religion at Kokugakuin University in Tokyo, said, "The family system in Japan, which had been based on holding memorial services for ancestors, is on the verge of collapse, and there has been an increase in the absence of families memorializing the dead."