Kyoto, Japan -- A Buddhist monk on Wednesday finished a grueling nine-day ritual of not eating, drinking, or sleeping as he chanted sutras 100,000 times. 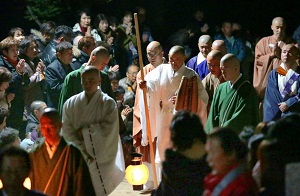 << Buddhist monk Kogen Kamahori (center) walks while being assisted at Enryakuji Temple in Otsu, Shiga Prefecture, early Wednesday after completing a nine-day ordeal without eating, drinking, sleeping or lying down, and during which he chanted sutras 100,000 times. | POOL/KYODO

The endurance test by 41-year-old Kogen Kamahori made him a living form of the Buddha, according to his temple’s beliefs.

He was the 13th monk to complete the test since the end of WWII.

The monk emerged from a training facility at Mount Hiei, a holy mountain that straddles Kyoto and Shiga prefectures, to be greeted by some 600 onlookers and members of the media.

Dressed in a white robe, he appeared shortly before 2:00 a.m. and was assisted by fellow monks.

The program is considered the toughest part of a seven-year training that includes a total of 1,000 nonconsecutive days walking around the mountain in a bid to achieve enlightenment.

He started in 2011 and had completed 700 days of walking before beginning his fast. He is expected to finish the mountain walk in the fall of 2017.