YACHIYO, CHIBA PREF. (Japan) -- In Japan, where communal ties to local Buddhist temples are fading, families have in recent years been able to go online to find a monk to perform funerals and other rites. 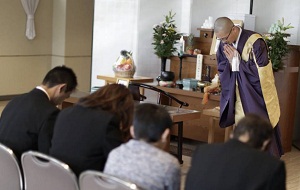 But when Amazon Japan allowed a provider to offer Obo-san bin, or Mr. Monk Delivery, on its website, it shone a spotlight on the emerging trend and prompted a major Buddhist organization to criticize the Internet marketer of commercializing religion.

A basic plan for a monk, transportation and a donation offered by the Tokyo-based provider, Minrevi Co., one of dozens of emerging budget companies, costs ¥35,000. Three other options are available for more money. The monks would typically go to a home, funeral hall or a grave to perform the requested ceremony.

“Such a thing is allowed in no other country in the world. In this regard, we must say we are disappointed by an attitude toward religion by Amazon,” Akisato Saito, director of the Japan Buddhist Association, said in a statement.

Many Japanese, however, welcome the service as a consumer-friendly approach to Buddhist rituals, whose cost is often perceived as murky and overpriced. Buddhist-style memorial services offered by temples comparable to the “monk delivery” could cost ¥100,000. Funerals are even more expensive and can cost well over ¥1 million.

Monk delivery services have emerged as many of Japan’s 75,000 temples are losing offerings and business with hereditary members in their communities, which traditionally have been the main source of financial support. That is threatening the survival of many temples in rural areas. In fact, some experts predict the majority of Japanese temples without income from tourism and other businesses will close over the next several decades.

Minrevi spokesman Jumpei Masano says the service seems to attract those who want to have Buddhist funerals but are uneasy about the pricing system, and want to keep their distance from temples.

“Many people don’t have ties with temples and they have no idea where and how to arrange Buddhist rituals, while monks are increasingly concerned about their declining temple membership,” Masano said. “We can cater to the needs on both sides and hopefully we can bring them together.”

Some monks acknowledge that the growing business highlights Buddhist temples’ complacency and failure to reach out and adapt to the people’s needs.

“We do understand there are criticisms of us as well and we take them seriously. And we must ask ourselves if and how we can change,” said Hanyu Kakubo, public relations secretary for the Japan Buddhist Association.

When Yutaka Uematsu’s 17-year-old son, Kakeru, died just over a month ago after battling cancer, he searched on the Internet for a funeral service provider.

Uematsu did not consider asking his father’s family temple as he had heard the prices charged for a family member’s funeral were “outrageous.”

So he and his wife went to the Minrevi website and picked for their son a package at a price less than half or even cheaper than an average, conventional service.

“Honestly, the cost was my biggest concern,” Uematsu said. “I liked its price system that was simple and clear.”

At first, he was worried about the quality of the service he might get, but that was not a problem. A 24-hour customer service line was also helpful for the couple, who were emotionally devastated by the loss of their son. While it did not offer counseling services, representatives could be reached regarding funeral details at any time, helping them feel more at ease during a painful time. Uematsu also arranged the traditional 49th-day posthumous ritual for his son using the same service.

Amazon declined comment, saying it is only renting the space to Minrevi to promote the service, which offers only the monk dispatch and a separate ¥20,000 charge for a posthumous Buddhist title, not funeral packages.

Minrevi, whose orders for the monk dispatch has tripled over the past five years, said Internet-based inquiries and phone calls surged after it placed the service on Amazon. More surprisingly, some 100 monks came forward to register for the service. The company already has contracts with 400 monks nationwide, said Masano, the spokesman.

Kaichi Watanabe, the 40-year-old monk dispatched to a memorial ceremony for the Uematsu family recently, said he had been looking for ways to perform rituals to earn a living and meet more people to share Buddha’s teachings.

His elder brother had succeeded the temple founded by their grandfather, also a monk, in Fukushima Prefecture, so Watanabe had to go elsewhere. About a year ago, he found Minrevi and signed a contract.

“Today, nobody comes to temples asking for us to perform (funeral rites) for their parents,” Watanabe said in an interview before the service, at which he chanted in front of an altar decorated with chrysanthemums and Kakeru’s photo in a black frame. “I’m hoping that a service like this, a brainchild of the Internet age, could make Buddhist temples . . . more approachable . . . for everyone.”

“There is no point being a monk,” he said, “if we can’t offer a helping hand when someone needs us.”