Mt. Atago, Japan -- My research work on local ecology and folk spirituality often brings me into the grounds of small village Buddhist temples, many of which are surrounded by dense sacred groves. 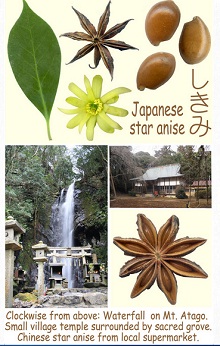 At this time of year, the temple grounds may be littered with strange little woody structures, about two to three centimeters in diameter and shaped like an eight-pointed star. Alongside the woody fruits are scattered hundreds of bright shiny tannish-brown seeds, a little less than a centimeter in length.

These are the fruits and seeds of a small evergreen tree called a star anise. Several dozen species of star anise, all placed in the genus Illicium, are known worldwide, mostly from Asia but also from North and Central America. The most famous of these is the Chinese star anise (I. verum), the dried fruits of which are widely used as a spice and herbal medicine.

Although the star anise trees are not related to actual anise, they contain similar flavonoids and produce the same licorice-like taste and smell. In Asia the Chinese star anise, called to-shikimi in Japanese, is used to spice up a great variety of dishes. In Europe as well, this star anise is employed to flavor liquors such as French absinthe and pastis, Italian sambuca and Greek Ouzo.

Unfortunately, the species found at Japanese temples, called the Japanese star anise or shikimi (I. anisatum), contains deadly toxins that can cause severe inflammation of the kidneys and digestive organs. In Japan the fruits of this species are listed under the Poisonous and Deleterious Substances Control Law (Dokubutsu Oyobi Gekibutsu Torishimari Ho).

In America, the U.S. Food and Drug Administration has issued a warning against drinking star anise tea, which is sold as a health tonic and also thought to prevent abdominal cramps in infants. These teas are made from Chinese star anise, but some may contain small amounts of Japanese star anise as well, and can cause severe vomiting and even seizures.

Although highly toxic, the shikimi is considered a sacred plant in folk Buddhism. The first time I encountered one of these shrubs was several decades ago, on a research trip into the far north. I was staying in a Japanese-style inn in a small mountain village. There had recently been a death in the family, and the people were holding a simple funeral ceremony. The deceased, an elderly man, had been laid out in a coffin in an inner room, and the mourners were filing in to offer sticks of incense. Surrounding the body were cut branches of a very fragrant shrub that I was later informed was shikimi. The branches, I was told, helped to purify the air and keep down the odors of decay.

Much later I again encountered the shikimi on a hiking trip up Mt. Atago, a 924-meter-high mountain that guards the northwest wall of the Kyoto Basin. The deity inhabiting this mountain, Atago Gongen, is an amalgamation of the Buddhist avatar Shogun-Jizo, once popular among medieval period samurai warriors; and the Shinto fire kami Kagutsuchi, still renown throughout the land for his ability to keep Japan’s wooden dwellings safe from fires. Atago Gongen is said to appear in the form of a long-nosed winged creature known as a tengu, and is served by wild boar familiars. In popular representations he is usually depicted as a helmeted Buddhist saint riding a horse.

Today, there is a Shinto shrine, Atago Jinja, near the top of the mountain. Normally, trees in the Tea Family, sakaki (Cleyera japonica) or hi-sakaki (Eurya japonica) are presented as offerings to the kami at Shinto shrines. At this shrine, however, branches of shikimi are offered instead. This situation may reflect the history of the shrine, which until the late 19th century was a Buddhist temple. In the past, women from nearby villages would hike up to the shrine each day, carrying bundles of shikimi sprigs to sell to the pilgrims and visitors. Today the sprigs can be purchased at the shrine office.

Shikimi is also used to make traditional incense, and for carving Buddhist images. The leaves are so fragrant that you can easily identify a shrub with your eyes closed. The flowers, which in the Kanto Region bloom in mid-April, are two to three centimeters in diameter, and range in color from fairly dense yellow to white with a slight yellow tint. Each arm of the woody eight-armed star contains a single seed.

Shikimi are native to Japan from the north Kanto region southward, and are also distributed on Taiwan and the Chinese mainland. They prefer shade to strong sun, and in Japan are often found growing in mountainside forests under momi fir trees (Abies firma). Shikimi are also widely planted at Buddhist temples and graveyards, including the large public cemeteries in big cities. Dried Chinese star anise fruits are widely available in Japanese supermarkets, where they are usually sold under the product name hakkaku.

----------------
Short is a naturalist and cultural anthropology professor at Tokyo University of Information Sciences.