Armed with an MBA, a Buddhist monk sets out to transform the future of the temple

Tokyo, Japan -- Setting aside time for solitude can be a healthy habit, and doing it in a spiritual atmosphere can be even healthier. 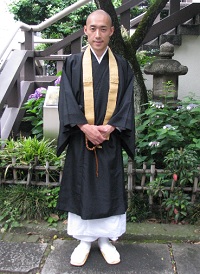 << On the job: Buddhist monk Shoukei Matsumoto is seen after a full day's work at Komyoji Temple in Tokyo. Matsumoto, 36, has initiated various projects in order to rebuild the lost temple community in Japan.

Many office workers in Tokyo’s Kamiyacho area, a business district between Roppongi and Toranomon, have benefited from the quiet space in Komyoji Temple that Buddhist monk Shoukei Matsumoto has made available for public use on weekdays.

As the director of a nonprofit organization called Otera no Mirai (Japan Fellowship of Buddhists), Matsumoto has initiated various projects in order to rebuild the lost temple community in Japan and attract more visitors to the religious site.

Waitresses don’t take orders at Kamiyacho Open Terrace, also known as the Temple Cafe, but the place gets packed during lunch time when people drop by with their lunch boxes, books or empty-handed just to relax or have a heart-to-heart talk with a monk.

On special occasions, events like concerts, yoga classes and workshops are held in the main prayer hall, where the principle images of the temple are enshrined.

“Nobody wants to sit through difficult lectures on religion. I believe it’s important to do something to appeal to all five senses, and it has to be something fun, like music,” Matsumoto explains.

Matsumoto, 36, is a rare breed of self-ordained monk who chose to renounce the world, so to speak, and enter into religion as a career despite having no family obligation to succeed in the temple priesthood.

He goes by his Buddhist name Shoukei rather than his legal name Keisuke, and what makes him unusual is the fact that he has an MBA, earned in India during a one-year break he took from his career.

When he graduated from the University of Tokyo in 2003, he says he didn’t consider any other career options, and even today he can’t imagine himself being an office worker in a suit and tie.

Matsumoto is married and living outside of the temple, but he says that is not uncommon these days as asceticism is not mandatory.

“Monastic seclusion is keeping a good distance from the common people and having a good influence on them. The two worlds are not completely separate. I understand there is darkness and suffering in the social order, and I want to be a hint giver.”

He travels regularly for seminars and sometimes forgets that he is a monk. He keeps busy generating new ideas, another being the Otera Oyatsu Club (Temple Snack Club), which is an effort to support single-parent households by donating food that has been offered to temples.

Most of Matsumoto’s lectures are directed toward monks, but he has also done study sessions for university students and entrepreneurs as he believes Buddhist teachings can be applied to business management.

Since 2012, Matsumoto has acted as the head of a cram school for temple management, and about 90 people, mostly chief priests and other monks who look after the operations of temples, graduate every year.

Putting his MBA education to work, he makes his own curriculum and advises students how to create an effective business plan and successfully manage a temple, while providing after-care support services.

Temples can help re-create a sense of togetherness, belonging and shared experience that individuals are longing for, and Matsumoto says temples have a lot to gain from a boost in the number of fans, most importantly survival.

“You don’t realize the true value of a temple until you connect with it for a long term. The longer you share your life with a temple, the more you start understanding its worth,” he says.

“Temples were built around families, blood relations and a sense of regional community. Today families and communities are collapsing, but people want to form bonds. I feel the need to create a new sense of community in an open, diverse society.”

In modern day Japan, the essence of Buddhist practice seems to have been misinterpreted by a lot of people. Many think Buddhism is about worshiping ancestors and tending graves. But Matsumoto says Buddhist teachings should really be about how to awaken the Buddha nature within oneself.

Matsumoto, who has a go-with-the-flow attitude, has nothing critical to say about the recent trends that include online grave visits, Internet memorial services and hakatomo (grave sharing).

“The world is changing, and there is no point in denying that fact. There’s a Buddhist concept that says all worldly things are transitory. A temple cannot stop time from passing, and it’s important that we accept what is and act accordingly,” he says.

It is only natural to wonder how monks handle stress, as they are humans after all. Meditation may ease anxiety, but not solve all of life’s problems.

“I’m human so there are times I do get negative feelings, but I don’t deny those feelings or dwell on them. I become mindfully aware of that situation and accept the negative self,” he says.

Until now, Matsumoto spent energy training monks and trying to help existing temples, but seeing more than 400 people graduate from his school, he feels that it’s time to move on to the next stage, where he hopes to see temples connect to communities and businesses.

Matsumoto is up to date with digital technologies and plans to take advantage of social networking sites to spread Buddhist wisdom.

“Temples will go bankrupt if they don’t use social media. We have more freedom to do what we want now, because the older generation realizes that things have to change and we have to reconsider the role of temples.”

Matsumoto thinks that the day will come when children will become interested in priesthood as a career — even more so than sports or medicine — as the rapid development of technology will soon become, if not already, a threat to human existence.

“AI robots will replace humans in the workplace,” he says, “and when that happens, I feel that the only untainted territory left for humans will be art and religion.”
TOP