Mysterious Buddhist ritual for women to be re-enacted in Tokyo

Tokyo, Japan -- "Nunobashi kanjoe," a sacred ceremony praying for the rebirth of women in "gokuraku-jodo" (pure land of bliss in Japanese Buddhism) in Toyama Prefecture's Mount Tateyama, that was barred to women in the Edo Period, will be re-enacted in a Buddhist chant concert in late January, 2007, in Tokyo's Aoyama. 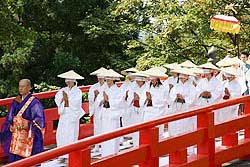 During the ceremony, blindfolded women in white slowly walk and cross a bridge covered with a white cloth, led by monks and "gagaku" (ancient Japanese court music) performers.

The ceremony, once disappeared after the movement of "haibutsu kishaku" (abolishing Buddhism) in the early Meiji Period, but was reproduced for the first time in 140 years in 1996.

Where: Spiral Garden, 1F Spiral, 5-6-23 Minami Aoyama, Minato-ku, Tokyo (One minute walk from Exit B1 or B3 from Omotesando Station on the subway lines).