Tokyo, Japan -- Kubo and Sachiko Sakurai are the best of friends. The two seniors sing side-by-side in a chorus group, go out for lunch and dinner together, and even pray for each other. Their closeness won't end with death. 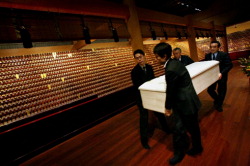 << Employees at the Tochoji temple in Tokyo carry a coffin past rows of mortuary tablets marking the deceased on Monday, Feb. 5, 2007. (AP Photo)

Kubo and Sakurai are part of a group at a Buddhist temple in Tokyo brought together by one fact: When they die, their remains will not lie in a tomb with their families, but with each other in a prayer hall instead.

"We're like a big family," said Kubo, 64, decked out in an elegant black dress during choral singing practice one recent afternoon for members of Tochoji temple in downtown Tokyo.

The family tomb has been the ultimate resting place of the Japanese for more than a millennium. But with plot prices stubbornly high, filial ties fraying, couples splitting and families having fewer and fewer children, the group crypt is facing some competition.

"In a regular tomb, everybody in the family goes in. But what if you're alone?" asked Bendo Kuroo, a chief priest at Tochoji. "The old way we were doing it just couldn't work anymore. The population is dropping."

The one-person grave system at Tochoji -- one of about 1,000 temples offering similar services -- is among the many ways the Japanese way of death is evolving as people become more individualistic, convenience-minded and eager for bargains.

A growing number of temples, for instance, are storing remains together in multilayered, underground chambers to save on plot costs. Mourners enter a special room, insert a card into a machine, and a conveyer belt delivers the boxed ashes of their loved ones for praying.

And more and more Japanese are doing what was once unthinkable in an ancestor-revering culture: having their ashes scattered in the ocean or over a mountainside.

"While some people still cherish the traditional graves, there are also more people who see no value in graves at all," said Hideo Usui, editor at Gekkan Butsuji, a monthly Buddhist journal. "The traditional stereotype on how a grave should be is beginning to fade." 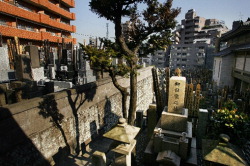 A crowded cemetery is surrounded by office buildings and apartment blocks in Tokyo on Monday, Feb. 5, 2007. (AP Photo)  >>

That tradition can be an expensive one.

In the crowded center of Tokyo, for instance, grave plots can cost up to 10 million yen (nearly US$100,000), and temples then charge hundreds of dollars a year to maintain them, said Joji Koyama, a Tochoji official.

Families nowadays not only balk at the initial cost, but are also reluctant to saddle their ancestors with annual cleaning and additional prayer charges -- costs now borne by fewer children as family sizes shrink.

According to tradition, the first-born son of a couple and his wife inherit the right to be buried in the family tomb. But amid the proliferation of one or no-child families, many in Japan are finding that they have no one to follow them into the tomb.

Increasing divorce rates and a higher percentage of Japanese never marrying has also dented the family grave tradition -- and sent temples dependent on such businesses to retool their tomb system or perish.

At 416-year-old Tochoji, which instituted the "personal" graves system in 1996, members pay about 800,000 yen (about US$8,000) for a spot in a large hall lined with tiny, gold-plated grave markers -- a bargain in Japan. Behind the markers are small boxes containing cremated remains, and there are no further maintenance charges for descendants to deal with.

Temple officials say the system is a hit: 8,500 people have already signed on, and Tochoji is constructing another crypt with another 3,000 spots. Officials say 70 percent of the members are still alive.

Special Buddhist "death names" are carved on the wooden markers even before death, so members know exactly where they will go. In the 33rd year after death, an auspicious anniversary in Buddhist cosmology, the remains are transferred to a separate common container, opening up places for new "members." << Misako Kubo, right, and Sachiko Sakurai, left, sing together during their chorus practice at the Tochoji temple in Tokyo on Monday, Feb. 5, 2007. The two women met while registering for burial plots at the temple and are now members of a chorus together and have become close friends. (AP Photo)

Koyama said the system reflects Japanese society at large. For instance, the graves are particularly popular among women who because of marital problems or difficulties with in-laws, want to be interred separately from their husband's family tomb.

Some of the people with reserved spots have taken the extra step of forming clubs for choral singing, water-painting, origami and other hobbies.

Socializing with one's eventual crypt-mates might seem macabre. But Kubo and Sakurai -- both widows with husbands interred at Tochoji -- displayed a clear-eyed view of death that illustrates the practical Japanese way of facing life's end.

"We all pray at each other's tombs," said a smiling Sakurai, 71, who joined the temple because she has no sons to carry on a family tomb. "The atmosphere here is totally different from other temples."