Tokyo, Japan -- Religious organizations, mindful of divided public opinion on visits by the prime minister to Yasukuni Shrine, have been using their clout to try to sway the issue. 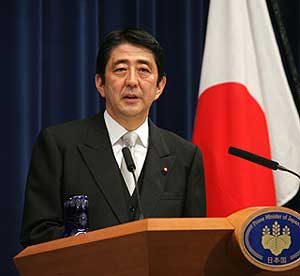 These groups began flexing their political muscle after the July 29 Upper House election that resulted in a mauling for the ruling Liberal Democratic Party led by Prime Minister Shinzo Abe.

On the other hand, several Buddhist-related organizations called on Abe and his Cabinet ministers to refrain from visiting Yasukuni, especially on Aug. 15, which marks the anniversary of Japan's 1945 surrender in World War II.

With traditional support groups for the ruling Liberal Democratic Party, such as the construction industry, playing a weaker role in elections, religious organizations that can bring out the vote have been gaining influence.

One group that has been calling for an official visit to Yasukuni by Abe is Bussho-Gonenkai, a lay Buddhist organization.

The group supported two LDP incumbents who ran in the proportional representation constituency in the July 29 election.

The group worked closely with Nippon Izokukai (Japan War-Bereaved Families Association) to round up votes for LDP candidates.

An official of the group said, "Having a religious organization support an established party is a legitimate activity."

Another candidate in the proportional representation constituency was Seiichi Eto, who was reinstated to the LDP by his close friend Abe after being expelled for opposing postal privatization legislation pushed by then Prime Minister Junichiro Koizumi.

Eto was supported by Japan Conference, a conservative group seeking a new Constitution and official visits to Yasukuni by the prime minister. Eto received support from several religious organizations belonging to Japan Conference.

On the other hand, the Federation of New Religious Organizations of Japan, made up of 69 groups, mainly Buddhist, issued a statement Aug. 9 calling on the government not to get involved with a particular religious institution.

As well as supporting two candidates from opposition Minshuto (Democratic Party of Japan) running in the proportional representation constituency, the group also instructed members in Tokyo to vote for an LDP incumbent in the same constituency.

The group also supported about 30 candidates from both the LDP and Minshuto in prefectural districts based on its own standards that include not siding with one party and calling for a continuation of separation of religion and state.

Class-A war criminals are enshrined as deities at Yasukuni along with the rest of the country's war dead.