Tokyo, Japan -- Most in Japan may know Buddhism has something to do with controlling lust and anger, and is associated with funerals and graves, while Shinto involves venerating nature, and weddings. But many people have trouble making theological distinctions between the two or even telling a Buddhist temple from a Shinto shrine. 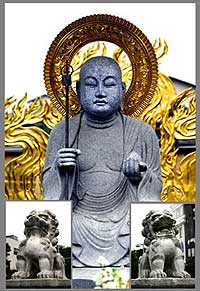 The following is an attempt to explain why Japanese often get Buddhism and Shinto mixed up:

The Buddha, or "the enlightened one," was born as Gautama Siddhartha in what is today Nepal in the fifth or sixth century B.C. He achieved enlightenment under the Bodh Gaya tree at age 35 and spent his life teaching across central India until his death at age 80, receiving the honorific title Sakyamuni, or "O-Shaka-sama" in Japanese.

Central to Sakyamuni's teaching was that the universe is always changing, including our psychological identities, meaning there is nothing humans can truly call "the self."

Buddhists believe a deep understanding of this is required to dispel the basic causes of suffering. Compassion for all sentient beings is another deeply held tenet.

Shinto — the backbone of Japan's cultural identity — is an ancient system of animistic beliefs and customs.

In popular belief, Japan is the land of Yaoyorozu no Kamigami (the 8 million gods). Among them are a vast pantheon of deities with well-defined personas. Perhaps most important is Amaterasu Omikami, the sun goddess and legendary ancestor of the Imperial family.

But in the words of author Motohiko Izawa, any entity possessing "uncommonly wondrous characteristics . . . such as a cedar that has lived a thousand years or a river that has long provided people with water" may assume divine status as well.

If Buddhism and Shinto are so different, what's confusing?

Ever since Buddhism was introduced to Japan in 552 (some say 538), Japan has seemed uncertain about how to weave it into its cosmology.

The year the religion was introduced, a delegation from the king of Peakche, a territory on the western Korean Peninsula, sent the emperor an image of the Buddha in gold and copper and a collection of the holy texts known as sutras.

The internationalists in the Japanese court welcomed Buddhism. Others saw it as a threat to the status quo, with Buddha nothing more than a "jajin," or devil.

Prince Shotoku (574-622) promoted Buddhism and it took hold. Still, Japan would never see a full conversion away from its indigenous religion, as occurred to a much greater extent across pagan Europe with the introduction of Christianity. Rather, Japanese absorbed Buddhism gradually, mixing it with local folk religions.

This process played out in the divine realm, too, with certain Shinto gods coming to be seen as protectors of the Buddha. One was Hachiman, the Shinto god of war, who legend has it aided the construction of the Great Buddha statue in Nara during the Nara Period (710-784). This act of kindness won him the name "Great Bodhisattva (Buddhist saint) Hachiman" in 781.

Reflecting this meeting of religions, Hachiman was sometimes depicted in sculptures as a very unwarlike Buddhist monk.

But what does the eighth century have to do with mixups over temples and shrines now?

The syncretism, or weaving together of religions, would continue over centuries as Japan went about absorbing Pure Land, Zen and other Buddhist sects from China. Over time, cross-pollination between Buddhism and Shinto would deepen in a process known as "shin-butsu shugo" (Shinto-Buddhism coalescence), or less flatteringly as the "shin-butsu konko" (Shinto-Buddhism jumble).

Much of the convergence amounted to Buddhism trying to make a mark on the host culture. Buddhist monks felt certain Shinto divinities needed salvation. So they chanted sutras in front of shrines that were the gods' sacred homes.

Meanwhile, temples started sprouting up next to Shinto shrines, to be called "jingu-ji," meaning "shrine-temples." By the 16th century, such mixing and matching had become official policy.

Nationalist yearnings have surfaced periodically, resulting in calls to rid Shinto of its foreign influence, especially during the Meiji Era (1868-1912) push for a State Shinto purged of its foreign Buddhist influences.

It was impossible, though, to completely sever the link formed over so much time, and this helps explain why Buddhism and Shinto tend to blur together somewhat in the modern Japanese mind.

What evidence of syncretism do shrines display?

Guarding the average Shinto shrine are two stone statues, most often of the mythical Koma-inu, which despite the "inu" (dog) in its name actually looks like a miniature lion.

Koma-inu fend off evil for a wide range of gods. Also seen are statues of O-Inari-sama, the god of rice harvests represented as a bush-tailed fox, as well as other animals, including cows, boars, monkeys and even an occasional pair of turtles.

Koma-inu reveal cultural influences from abroad. Author Hiromi Iwai writes in the book "Nihon no Kamigami to Hotoke" ("The Gods and Buddha in Japan") that Koma-inu's lionlike design can be traced to China, while "Koma" may have been derived from "Korai," an ancient Korean dynasty.

In each pairing, one creature's mouth will usually be open and the other's closed. (This is true with other animals as well.) The "A" that seems to issue from one Koma-inu's mouth, and the "M" voiced through the other's closed lips are said by Iwai to represent the ancient Indian belief that the universe began with the first sound and will conclude with the other.

In Hinduism, this is written fully as "A-U-M," with the three letters representing a long list of concepts. One is the triad of Earth, our surroundings and heaven. Another is the trinity of Hindu gods Brahma (the Creator), Vishnu (the god of maintenance) and Shiva (the Destroyer). In a holy word, Aum embodies the entirety of being.

Commonly known in the West as "Om," the term was adopted as a mantra by Buddhists, who in turn transmitted it to Japan via China during the Asuka Period (593-710). After that, it showed up on Shinto statues, reminding visitors to holy sites of our humble place within the greater scheme of things.