Tokyo, Japan -- The exiled leader of Tibet His Holiness the Dalai Lama arrived in Japan early this morning for a nine-day visit at the invitation of Japanese Buddhist groups. 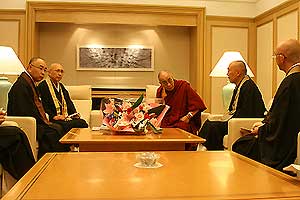 << His Holiness the Dalai Lama on Thursday met briefly with the members of the Kanagawa Buddhist Federation at the Haneda Airport, Tokyo where the group extended a welcome to the Tibetan leader.

The Tibetan leader was received at the Narita Airport by officials from the Representative office of H.H. the Dalai Lama as Tibetans and Mongolian Buddhists lined up to welcome him at the airport.

From the Tokyo International airport, His Holiness headed straight to the Haneda Aiport where he met briefly with members of the Buddhists groups.

“Your Holiness we are very honoured and pleased to have you here with us,” Ven. Wada Taiga, the current visit Director of the KBF told His Holiness.

“I always love coming to Japan. I am very happy to be here again in Japan at your invitation,” His Holiness told the Buddhist groups.

“Even if Japan is materialistically very advanced there are many problems here. Your spiritual wisdom can very much help enlighten us in this regard, Ven. Taiga told His Holiness.

“Yes, only materialistic development is almost very difficult to solve all human problems” His Holiness responded.

Stressing on the importance of inter religious harmony, His Holiness, in his brief interaction with the leaders of the Japanese Buddhist group, encouraged them to develop closer understanding with other religious faiths.

Ven. Kuroda Ryujo, the Vice Chairman of KBF was also present to greet His Holiness at the Haneda Airport.

During the visit, His Holiness is expected to give a series of educational and religious lectures in Yokohama and other cities. On November 20, His Holiness will address some 5000 plus audience on Faith and Peace (Jap: Shinzuru Kokoro to Heiwa) at National Convention Hall of Yokohama as part of a grand function to commemorate the 40th founding anniversary of the KBF.

Record from the Office of Tibet, Japan shows His Holiness first visited Japan as early as Ocotber 1967, on his first journey outside Tibet, China and India - since fleeing Tibet in 1959 after a failed mass uprising by Tibetans against Chinese oppression following China’s illegal occupation of the country.

The visit is the Tibetan leader’s first outside-India visit since he was awarded the US Congressional Gold Medal last month. His Holiness last visited Japan in November last year at the invitation of a religious group. The current visit is the Dalai Lama’s 11th visit to the country.

China has vehemently opposed to the Tibetan leader’s other overseas trips in the last few months. Beijing also criticizes the Dalai Lama’s frequent visits abroad, saying foreign governments are interfering in its internal affairs by hosting him.

However, top leaders of Australia, Germany, Austraia, USA and Canada have met with the Tibetan leader in exile in the official venues earlier this year ignoring China’s usual objections. President George W. Bush went on to present US Congress’s’ Highest civilian honour to the Dalai Lama at the Capitol Rotunda on October 17.

Meanwhile, no Japanese government officials are expected to meet with the 72-year-old Nobel Peace Prize laureate during the visit.

The office of Tibet in Japan maintains that the trip is at the invitation of two very large Buddhist federations and that no official appointments from the Japanese government are on the schedule.

China, which has ruled Tibet since 1951, opposes any meetings by foreign dignitaries with the Dalai Lama. China continues to accuse the Dalai Lama of seeking to divide the country although the Tibetan leader has publicly stated that he is only seeking greater autonomy for Tibet, not independence.