"I may skip reincarnation this time", says Dalai Lama

Tokyo, Japan -- The Dalai Lama is floating the idea of breaking a centuries-old Tibetan Buddhist tradition by naming his successor or letting monks elect the next spiritual leader, according to news reports. 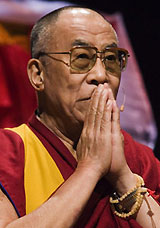 His comments in Japan come on the heels of a recent order by China that it must approve Tibet's future spiritual leaders.

The order has fuelled concerns that China may forcibly choose a pro-Beijing leader once the current Dalai Lama is dead.

"If the Tibetan people wish to uphold the Dalai Lama system, one possibility would be to select the next Dalai Lama while I am still living," the Dalai Lama was quoted as saying in an interview with the Japanese national newspaper, Sankei Shimbun.

Tenzin Gyatso, who is the 14th reincarnation of the Dalai Lama, told the newspaper that among the options being considered is the democratic selection by the high monks of Tibetan Buddhism or the appointment of a successor by himself.

According to Tibetan Buddhist tradition, monks search for the reincarnation of the lama after the spiritual leader's death, but Gyatso seems to believe Tibetans may support a break in the custom.

"The Tibetan people would not support a successor selected by China after my death," the Dalai Lama was quoted as saying to the newspaper.

China's order, which came into force in September, says that all future lama appointments related to Tibetan Buddhism "must get government approval," according to the state news agency Xinhua.

The order also keeps outside sources from having "influence" on the selection process, the report said.

In 1995, the Dalai Lama chose six-year-old Gendun Choekyi Nyima as the 11th Panchen Lama. The boy and his family disappeared soon after and have not been heard from.

China's government later named Gyaltsen Norbu as the 11th Panchen Lama. They said Norbu and his family are being kept in a secret location for their protection.

The Dalai Lama and his followers have lived in exile in India since fleeing in 1959.

His latest comments were made during a nine-day visit in Japan where officials, who are seeking to improve relations with China, gave him the cold shoulder.

His worldwide tour also brought him to Canada in October when he met Prime Minister Stephen Harper.

China objected to Harper's meeting with the Dalai Lama, whom they view as a dangerous separatist.