TOKYO, Japan -- Japanese monks and nuns hit the catwalk in Tokyo on Saturday in a bid to spread Buddhism among younger people in this rapidly aging society. 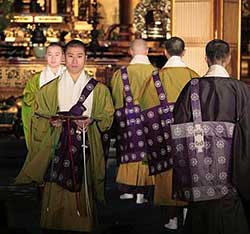 The fashion show opened with a Buddhist prayer set to a hip-hop beat at the centuries-old Tsukiji Honganji temple, where nearly 40 monks and nuns from eight major Buddhist sects showed off elaborate robes in an effort to win back believers.

Five monks from each school walked on the runway, then chanted prayers and wrapped up in a grand finale with confetti resembling lotus petals.

"Their robes were gorgeous," said Sayaka Anma, one of the audience in her 20s, after the monks' show. "I was a bit surprised in the beginning, but it was very moving."

More than 1,200 years after it first arrived from mainland Asia, Buddhism in Japan is in crisis, priests say.

Almost three-quarters of Japan's population of 120 million are registered as Buddhist, but for many, the only time they enter a temple is to attend a funeral. That has sent many of the country's 75,000 temples into financial trouble.

"We wanted to show the young people that Buddhism is cool, and temples are not a place just for funerals," said Koji Matsubara, a chief monk at Tsukiji.

The Tsukiji Honganji offers theological seminars in English for foreign visitors, and has fitted its main hall with a pipe organ for Western-style weddings to attract young couples. Some other temples have also introduced cafes, art galleries and other innovations to reach out to young people who are interested in a different lifestyle.

"Many of us priests share the sense of crisis, and a need to do something to reach out to people," said priest Kosuke Kikkawa, 37, one of the organizers of Saturday's event. "We won't change Buddha's teachings, but perhaps we need a different presentation that can touch the feelings of the people today."