Tokyo, Japan -- Prince El Hassan bin Talal of Jordan has been named as the 2008 winner of the Niwano Peace Prize for efforts at building peace with justice in the Middle East, especially with regard to the Israeli-Palestinian conflict. 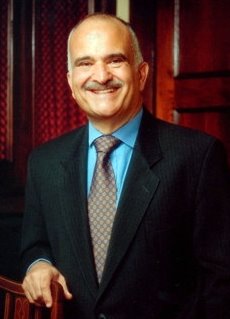 The prize is often seen as akin to a Nobel Peace Prize for members of the faith community and is awarded by the Japan-based Niwano Peace Foundation. The award comes with 20 million yen (US$186 000), the Buddhist group said in a 27 February statement.

"He highly deserves the prize for three reasons: his firm commitment to peace and inter-religious dialogue, his permanent message for the understanding and practice of Islam as a religion of peace, and his high ethical credibility," said Doudou Diene, United Nations Special Rapporteur on contemporary forms of racism, racial discrimination, xenophobia and related intolerance. Diene is a member of the committee that awards the prize.

"Prince Hassan has devoted his life to building peace with justice in the Middle East based on his understanding of human dignity informed and inspired by his faith. He has been a bridge builder across existing political and religious divides," said the Niwano Foundation in its statement made available in Geneva.

"His work on peace and justice and his inter-religious approach has always impressed me. The Jordanian government’s commitment to peace and justice is well-known and appreciated in both the inter-faith world and the human rights sector," said Yasmin Sooka, director of the Foundation for Human Rights in South Africa.

Hassan is president emeritus of the World Conference of Religions for Peace.

Katherine Marshall, a senior advisor of the World Bank on faith and ethics said, "Prince Hassan is a remarkable voice of reason and determination for peace."

Hassan was born in Amman, Jordan in 1947 and he studied at Christ Church College, Oxford, graduating with a degree in Oriental studies. Until 1999, he served as the closest political adviser of his brother, the late King Hussein of Jordan.

He recently became the president of the Foundation for Interreligious and Intercultural Research and Dialogue, which works to enable shared values between the three monotheistic religions of Christianity, Judaism and Islam, while respecting their differences.

The Niwano prize is named after the first president of the lay Buddhist organization Rissho Kosei-kai, Nikkyo Niwano. He devoted much of the last half of his life to promoting world peace, especially through inter-religious discussion and cooperation.

The presentation ceremony will take place in Tokyo on 8 May.