Tokyo, Japan -- As a young child I looked forward to Thursdays, the day my mom would bring home Japanese cartoon videos. I looked forward especially to “Japan’s Folk Tales,” which would present Japan’s many popular folk tales in animated form. 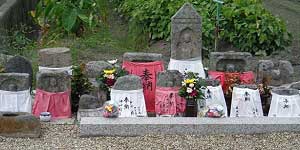 Many of the tales were about Jizo, who is one of the most popular of Japan’s deities, and is more commonly known in Japan as ojizo-sama or ojiso-san (sama and san are Japanese terms used to denote respect. Japanese people often refer to me as “Harumi-san.” Sama is even more respectful; the princess of Japan is often called “Masako-sama.”)

Jizo is a Bodhisattva, one of the main figures in Mahayana Buddhism, the branch of Buddhism most commonly found in Japan, Korea, China, and the United States. The Bodhisattva will withhold his or her own leap into Nirvana in order to be reborn again to help others. Jizo is one of the most popular of these Bodhisattvas, and appears in the form of a Buddhist priest in order to be a comfortable and familiar figure to help those in need.

Any tourist trekking Japan’s countryside and visiting roadside temples will quickly notice the many stone statues that litter the rural streets of Japan. These are the statues of Jizo. They are often clothed in stone robes and hold canes and are dressed in red bibs. They are often bald, smiling serenely, with eyes closed. Some, however, are faceless formless stones, only distinguished by the red bibs and aprons wrapped around them.

Traditionally it is believed that Jizo is the guardian of unborn children. One often finds the ojizosan in graveyards. According to one legend, children who die before their parents are punished for making their parents grieve, and must build small stone towers to gather good karma. Demons often come to smash the stone towers and beat the children, but Jizo protects the children by hiding them in his sleeves and robe. Flower and water and food offerings, and even small towers of stones are often visible in front of ojizosan, placed there by grieving parents hoping for protection for the souls of their children.

Almost all Japanese know the tale of an old couple who spent the summers making hay and in the winters weaving straw hats. One winter day, the old man and woman wove five straw hats to be sold in town. Their hope was to buy food for a New Year’s meal. Unfortunately, no one was interested in the straw hats and so after a long day in town he trudged back home.

On his way home he came upon six ojizosan who were covered in snow. He felt sorry for them and covered each ojizosan with his hats. When he came to the last ojizosan he was out of hats. Removing his own hat, he gently placed it on the sixth ojizosan. He made his way home and told his wife the bad news. She comforted him and commended his good deed for the ojizosan. Early the next morning they heard a loud noise outside. When they rushed to the door they found that their doorstep was piled high with the most delicious New Year’s delicacies. And far off they could see the six ojizosan hobbling away.

Stories such as these abound of the ojizosan that help travelers and children and poor in need, especially for their good deeds. There are also the stories of greedy and selfish people being punished by the ojizosan.

And thus as I walk past the ojizosan on the street I never know what to make of them. I think I have been too infused with the old folk tales to brush them off as mere superstition. I’ve been raised in a monotheistic tradition but I can’t help feeling awe and a little fear at the sight of the peaceful dark faces. And so just in case, I always offer a little bow before I set about my adventures.