KYOTO, Japan -- The powerful aura one feels while walking the more than 300 stone steps from a riverside path up Mt. Takao to Jingoji temple in Kyoto can be credited to the temple's profound connection with the top levels of Buddhist hierarchy. 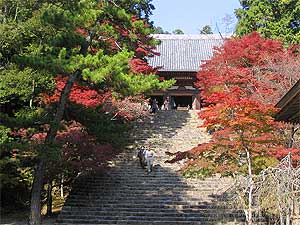 << Jingoji temple was at the center of the beginning and ultimately bitter end of the friendship between Saicho and Kukai, supreme leaders of Buddhist sects in the early Heian period (794-1192).

The temple has been an ashram--a spiritual and doctrinal headquarters - even before Kukai (774-835), the founder of the Shingon sect of Buddhism, first took up residence here.

Although there are many Kukai-related temples across the country, Jingoji is more exalted because it was at one of its two predecessors--Takaosanji temple--that Saicho (767-822) and then Kukai were installed as the supreme leaders of the country's Buddhist sects, one after another.

"Both Saicho and Kukai were touted [as young leaders] when they were here [to give Buddhist lectures and hold initiation ceremonies, respectively]," said Kosho Taniuchi, Jingoji temple's head priest. "But they were only able to become leaders with the backing of [the influential elite of the] Wake family."

Takaosanji was built in the 780s by Wake no Kiyomaro, a senior imperial court official known for proposing the relocation in 794 of the national capital to Heiankyo, present Kyoto. The temple also served as Wake's family temple.

Emperor Kanmu assigned Wake's eldest son, Hiroyo, to find outstanding Buddhist priests who might replace the monks of the Nara Buddhist sects established in the Nara period (710-784) as supreme leaders.

The emperor bitterly resented the sects' authoritarian nature and wanted to avoid the emergence of a politically influential monk who might threaten his regime, as had occurred in the Nara period.

"The emperor thought monks should stay secluded in mountain ashrams and away from politics," Taniuchi said. "Takaosanji temple was built in line with the emperor's will."

The Wake family tapped Saicho as a promising Buddhist monk while he was engaged in ascetic training at Mt. Hiei, located in current Shiga Prefecture, and in 802 he was invited to Takaosanji to lecture the high priests of Nara Buddhist sects, nobles and scholars on Hokekyo sutra.

The lectures were a great success, prompting Emperor Kanmu to allow Saicho to travel to the Tang Dynasty (618-907), in present China, to study and bring back Buddhist doctrines, providing him with financial support and personnel from the imperial court.

In 804, a fleet of Kentosen ships carrying official Japanese delegates set off for the Tang Dynasty, including not only Saicho, but also Kukai on a different ship.

After landing on different shores of the Chinese continent, Saicho traveled to a sacred site at Mt. Tiantai in current Zhejiang Province, while Kukai went to the dynasty's capital, Changan [current Xian], to study with Huiguo, known in Japan as Keika, the seventh master of Shingon esoteric Buddhism.

Saicho, who was 37 at the time, had not been inclined to study the prevailing esoteric Buddhism, but he learned its essence shortly before his departure to Japan, Taniuchi said.

Upon Saicho's return to Japan in 805, Emperor Kanmu was so delighted to hear he had learned esoteric Buddhism that he allowed him to hold ceremonies at Takaosanji, initiating senior monks of Nara Buddhist sects into esoteric Buddhism.

"Those were the first ceremonies of that kind held in Japan," Taniuchi said.

The key period of Kukai's stay in the dynasty, according to Taniuchi, was at Qinglong Temple, where he studied with Keika, a leader of esoteric Buddhism with more than 2,000 disciples. Before seeing him, Kukai learned sanskrit, a language necessary to understand the teachings, from two Indian monks at a different temple.

Keika chose to initiate Kukai into the secret doctrines and teachings of esoteric Buddhism, and appoint him as one of his two successors. Amazingly, Kukai is said to have mastered all of the materials within three months.

Kukai returned to Japan in 806, but doing so just two years after his departure put him in hot water with the court. Whereas Saicho had been given funds and staff, Kukai had only been permitted to travel to the Tang dynasty in the first place on the condition he stay there for 20 years.

For breaking the agreement, Kukai was forbidden to enter the Heiankyo capital. Instead, he remained in Kyushu, where his ship had landed, and submitted a list to the court of the sutras, documents, mandalas and ceremonial instruments he had brought back from the dynasty.

"Saicho saw the list and was amazed, [because many of the books and other items were completely new to him]. He made a copy of the list and kept it," Taniuchi said, adding that although the original list has been lost, Saicho's copy is still kept at Toji temple in Minami Ward, Kyoto.

"In the list, Kukai wrote that he had returned to Japan to propagate Keika's teachings, following his master's dying wish," Taniuchi said.

Kukai and Saicho began corresponding, with Saicho asking to borrow books. Their relationship continued even after Kukai began living in Takaosanji in 809.

At Saicho's request, Kukai held esoteric Kanjo ceremonies at Takaosanji in November and December 812 to initiate Saicho and others into the essence of esoteric doctrines.

"Due to the influence of Saicho's [endorsement], many people gathered to be initiated by Kukai," Taniuchi said.

"But the ceremonies created an opportunity for Kukai to propagate his teachings. As they spread across the country, Kukai's influence began to encroach on [Saicho's]," Taniuchi said.

However, Saicho and Kukai's relationship would soon come to an end. In 813, Saicho wrote Kukai to request an important sutra he wished to study, but Kukai refused to send it to him, insisting that esoteric Buddhism teachings should only be administered face-to-face.

According to Taniuchi, the disagreement brought into focus the absolute incompatibility of the two men's points of view.

Saicho regarded Kukai as a mere teacher of esoteric Buddhism, which he regarded as just one of many Buddhist schools. Conversely, Kukai regarded Saicho as one of his own disciples to be initiated by him into the supreme teachings of Buddhism.

"Saicho wanted to learn the teachings by reading, so he asked Kukai to lend him the texts again and again, but Kukai told him he must stay [at Takaosanji] for three years [to be indoctrinated]," Taniuchi said.

Saicho ordered his disciple to leave Kukai and return to him, but he did not obey.

Saicho and Kukai never met again, ensuring Takaosanji would be remembered as the temple where these giant figures both met and separated.

Saicho died in 822, and from then Kukai's status as the supreme leader of esoteric Buddhism was beyond dispute.

Two years after Saicho's death, Takaosanji was renamed Jingoji after being integrated with another temple. Kukai was appointed its first head priest, and as a result, Jingoji became a Shingon sect temple--Kukai had founded the headquarters of the Shingon sect in 816 on Mt. Koya in current Wakayama Prefecture.

Jingoji has remained a Shingon sect temple ever since.

Today, visitors enter its Kondo main hall to pray to the Honzon Yakushinyorai statue, a national treasure said to have been made between the late-8th century and early 9th century--which means it may be older than the ancient capital of Kyoto itself.

Looking at the 170-centimeter-tall statue, it is easy to get lost in thoughts of the centuries that have passed since its creation and the time of Kukai's leadership. The possibility that Kukai and Saicho themselves prayed to the same statue provokes a sense of solemn wonder.

Daishido hall was reconstructed in 1168 on the site of Kukai's personal lodgings and houses Itabori Kobodaishi, a wooden bas-relief of the man himself. The hall is scheduled to be opened to the public from Oct. 31 to Nov. 9.

Jingoji's collection of valuable artifacts includes dozens of national treasures and important cultural assets, many of them associated with Kukai. About 60 items are displayed in the Shoin hall each May during an event known as Mushiharai (removing insects through ventilation).

Foremost among the priceless treasures is Kanjo Rekimei, a list written in calligraphy by Kukai of people initiated by him into esoteric Buddhism.

Saicho's name is at the very top.

Taniuchi said: "Many parts of the list have splotches of ink on them, which makes you imagine how busy he was to continue with the initiation ceremonies. Looking at the list, you can really feel Kukai's personality and sense the history."

Another national treasure in the collection, Takao Mandala, also has close associations with Kukai. The nation's oldest existing mandala, a symbolic diagram of Buddhas and deities, it is said to have been made under the direct instruction of Kukai and later used as a model to make other mandalas.

Jingoji also has national treasures associated with other important historical figures, such as a portrait of Minamoto no Yoritomo, the first shogun of the Kamakura shogunate.

The beautiful scenery at the temple has a charm all its own. The surrounding areas are filled with maple trees more than 100 years old. It is fun to wander the grounds, where the Buddhist buildings and mountain paths that connect one area to another create an elaborate air of mystery.

Taniuchi encourages visitors who hope to fully appreciate Jingoji to learn its history.

"The temple was built at the initiative of Wake no Kiyomaro, who prayed for peace and the security of the country. That mission was inherited by Saicho, and then Kukai and by many others [for over 1,200 years]," he said. "We'll continue it beyond today."