TOKYO, Japan -- Japan's rapidly aging society is forecast to lead to shortfalls in young people, workers and tax revenues. Add to that another shortage: crematoria. 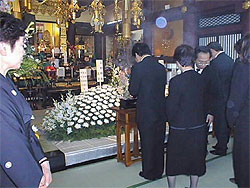 The number of people dying annually in Japan rose to 1.1 million in 2007, with nearly all of them cremated in accordance with Buddhist practices, according to the Health and Welfare Ministry.

However, the Nippon Foundation, a nonprofit philanthropic group, has come up with a unique idea: building "floating crematoria" ships that could incinerate remains at sea, bypassing the "not-in-my-backyard" syndrome and saving on real estate.

With the passing of the burgeoning elderly population, the annual number of deaths is projected to rise to 1.7 million by 2040 — far beyond what Japan's 4,900 crematoria can handle.

"We're already running at full capacity," said Takahiro Yamada, an official in Nagoya, where only one crematorium serves a city of 2.2 million. "We desperately need a new crematorium."

The number of Japanese aged 65 or older hit a record 27 million in 2007, more than 21 percent of the population. That percentage will nearly double in the next 30 years.

Japan, however, faces significant barriers to expanding the number of crematoria: high land costs and cultural taboos against anything related to death — meaning few Japanese would welcome a crematorium going up next door.

The Yagoto Cemetery has been struggling since 1999 to build a second crematorium, but opposition from nearby residents has so far blocked construction of the $167 million, 30-furnace facility.

The looming crematorium shortage has spawned some macabre proposals.

"A cremation vessel would have many advantages," said Katsuhiro Motoyama, a spokesman for the Nippon Foundation. "It is cheap to build and it does not occupy any land."

Yamada from Nagoya city hall said residents opposed to land-based crematoria had urged the government to look into the ship idea, but officials were skeptical.

"We have thought about it, but have decided it won't be realistic to deal with an expected volume of cremation," he said. "Also in terms of legality, it is not clear whether we can actually do this at sea."