NARA, Japan -- Yakushiji temple is filled with tributes and reminders of Xuan Zang (ca 600-664), who in the seventh century traveled to Nalanda, now an archaeological site located in Bihar State, India, in search of original Buddhist sutras that would become of vital significance to Buddhists in Japan. 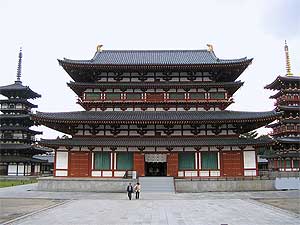 One of the sutras the monk brought back from his 17-year quest was the Hannyashingyo (Heart Sutra), now the most recited in Japan.

Yakushiji was built in the late seventh century and has as its main doctrine Yuishiki, a complex theory of the human mind that Xuan Zang learned in India. The monk is better known in Japan as either Sanzo Hoshi or Genjo Sanzo.

Among the many tributes to Xuan Zang at Yakushiji is a 49-meter-long, 13-panel mural that adorns the temple's Genjo Sanzo Complex, which enshrines the relics of the monk. The complex was built in 1991 with money donated by hundreds of thousands of people who had copied sutras, including the Hannyashingyo, which was based on the monk's translation of the Sanskrit original.

The mural was created in 2000 by renowned Japanese-style painter Ikuo Hirayama, 78, a longtime admirer of Xuan Zang who retraced the monk's route along the Silk Road a number of times while contemplating the artwork.

The artist credits Xuan Zang as inspiring his first major success, "Bukkyo Denrai" (The Transmission of Buddhism), which Hirayama painted in 1959 at the age of 29. The work depicts the Chinese monk reaching an oasis in a desert along the Silk Road.

Hirayama is a survivor of the atomic bombing of Hiroshima in 1945, but in his late 20s he thought he would soon die from its aftereffects. He suffered from constant fatigue and dizziness, and a low white blood cell count.

His goal in creating "Bukkyo Denrai" was to create a distinguished work before he died through which people could understand the importance of peace. He decided to use Xuan Zang as a motif.

"I didn't want it to be just an antiwar-oriented work. It had to be something that went beyond that," Hirayama says.

In the decades since his first success, Hirayama has painted a number of works that focus on Xuan Zang and the Silk Road.

Yakushiji temple officials asked Hirayama to create special works dedicated to Xuan Zang in the early 1970s, immediately after it decided to build the Genjo Sanzo Complex, prompting the artist to seek inspiration for the work by retracing Xuan Zang's route to Nalanda.

According to "Records of Western Regions in the Great Tang Dynasty," Xuan Zang's record of his trip--the 16th-century Chinese novel known in Japan as "Saiyu Ki" was based on the documents-- the monk left the Tang dynasty illegally in 629 to seek original Buddhist scriptures.

It took him three years to reach Nalanda, after passing through the Takla Makan Desert and Tian Shan mountain range, and it was 17 years later when he returned to the dynasty's capital, Changan, in 645.

There, Xuan Zang devoted himself to translating into Chinese a great number of Sanskrit Buddhist texts. Although he was unable to complete the work during his lifetime, the teachings were eventually introduced to Japan by Dosho, a Japanese monk who learned them from Xuan Zang in 653 and later founded the Japanese Hosso sect. Yakushiji is one of the major temples of the Hosso sect.

Hirayama wanted to gain as complete a sense as possible of what Xuan Zang went through more than 1,300 years ago, so made about 140 trips over 17 years--a period almost equal in length to Xuan Zang's epic journey--to Afghanistan, China, India, Kazakhstan, Pakistan, Uzbekistan and other countries.

Hirayama endured extreme heat in the desert in Turpan, China, where it was 49 C in the shade, and suffered headaches from the high-altitude of the Pamir mountains in Afghanistan. He also negotiated with Chinese and former Soviet Union authorities for permission to visit restricted areas.

In 2000, he finally completed the series of murals, which starts with the Wild Goose Pagoda in Xian in the Shaanxi Province of China, where the dynasty's capital was located, and continues on through the Himalayas, Buddhist monuments in Bamiyan, and moonlit scenery in Nalanda.

"During these trips, I realized traveling was an ascetic practice in itself for [Xuan Zang]," says Hirayama, who was awarded the Order of Culture in 1998.

"He must have had to persuade the locals to cooperate, which would've meant getting down to the very basics of cultural exchange. He couldn't have done that with pure knowledge or breeding--he must have had a rich human spirit," Hirayama says.

Although Xuan Zang is often praised for having imported the Buddhist sutras, Hirayama says what he admires most about the monk is how he "wandered through countries where he understood none of the languages, cultures or religions."

Emperor Tenmu, hoping to cure his ailing wife, ordered Yakushiji to be built in 680. Construction of the temple's original buildings began in the Fujiwarakyo capital, now Kashihara, Nara Prefecture, and was completed around 698. The temple was then relocated to its current site in Nara, or what was then the Heijokyo capital, in 718.

Most of the original buildings, including the Kondo main hall and the Saito pagoda, were destroyed by fire or other causes. The loss was significant, because the buildings reflected the Tang dynasty-influenced architectural style of the Hakuho era (late seventh century-early eighth century), when Buddhist art was in full flourish.

The only original structure remaining today is the three-storied Toto pagoda, built in 730. A national treasure, the pagoda appears to have six stories, an illusion created by each floor having an ornamental and a main roof. One U.S. art critic described the effect as "rhythmical."

Of the destroyed buildings, the reconstruction of the Kondo hall was a long-cherished dream at the temple, but the sheer expense of the project presented a great obstacle, according to Chief Abbot Eiin Yasuda.

In the late 1960s, when Yasuda was a priest of the third rank at the temple, he came up with a fund-raising plan in which people would pay to make sutra copies at the temple. The sutras would be kept at the Kondo hall once it was rebuilt.

According to Yasuda, the cost of reconstructing the hall, which was to house the gold-plated-bronze Yakushi Nyorai seated statue--the temple's principal image and a designated national treasure--was estimated at 1 billion yen. His fund-raising plan figured on the temple receiving just 1,000 yen per copied sutra.

"So many people doubted whether we could raise the money that way," Yasuda says, admitting that he also felt the plan might have to be left to a future generation. However, the temple raised the 1 billion yen by collecting 1 million copied sutras over eight years from 1968. The reconstruction of the main hall was completed in 1976.

Surprised by how quickly the target had been reached, the temple began thinking of reconstructing other buildings, and the sutra-copying has become the temple's signature activity.

Kaoru Hayashi of Nagoya visits the temple every month to copy sutras, which she says helps put her mind at peace. Hayashi, who copied her first sutra as a high school student, has a short-term goal of dedicating 500 sutras.

"Slowly grinding the sumi [ink block] is like aromatherapy," she says. "When I'm copying sutras, I think about the people who raised me or relatives who have passed away. When I feel lost, I can release my feelings [through copying sutras]. It's a precious time for me."

Yasuda says many people are attracted to the activity because they know the sutras will be stored at the temple buildings forever. "Many people feel at peace when they copy a sutra, and others pray for the repose of their ancestors," he says.

Besides the Kondo hall, the Saito pagoda was reconstructed in 1981, the Chumon gate in 1984 and the Daikodo lecture hall in 2003, with the expenses covered by the dedication of more than 7 million copied sutras.

All the main structures have been rebuilt to appear as they did in the Hakuho era, with the Toto and Saito pagodas standing to the east and west in front of the Kondo hall.

The 1,280-year-old age-darkened Toto pagoda and the rebuilt structures in vermilion and other colors reveal the telling passage of time. The ancient pagoda shows what these other buildings might have looked like had they survived for 1,300 years.

The temple is home to several other national treasures and important cultural assets, including statues and paintings. Some bear Asian and Mediterranean influences thought to be brought via the Silk Road.

The towering Nikko Bosatsu and Gakko Bosatsu statues, which flank the Yakushi Nyorai statue, are also national treasures. The three statues, collectively called the Yakushi Sanzon statues, are to be put on public display.

Yakushiji dispatches monks across the nation to hold sessions to help people better understand Buddhist teachings, morality and the temple itself.

When Yasuda himself speaks at such sessions, he emphasizes the need to maintain feelings of gratitude, compassion, respect, and a willingness to apologize and forgive.

Earlier this year, when the Nikko Bosatsu and Gakko Bosatsu statues were displayed together for the first time outside the temple in an exhibition organized in cooperation with The Yomiuri Shimbun at the Tokyo National Museum, the temple held guidance sessions four times a day.

"Yakushiji is a place where human resources are nurtured, so we should put priority on propagating Buddhist teachings," Yasuda says.

Genjo Sanzo Complex is open to the public until Nov. 25.