The Royal Grand Hall of Buddhism in Hyogo Perfecture, Japan, seems to be going for record-breaking feats

Hyogo, Japan -- AFTER many years and two failed attempts, Dr Kyuse Enshinjoh, founder priest of Japan’s Nenbutsushu Buddhist sect, found the perfect site for the temple of his dreams, and devotees and members put in every effort to realise their spiritual leader’s vision. 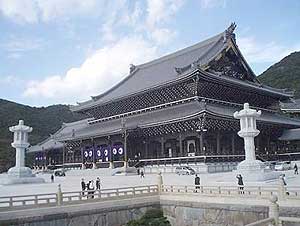 << Magnificent: The pair of huge stone lanterns at the entrance of the Royal Grand Hall of Buddhism are registered in the Guinness World Records as the world’s largest lanterns. – MAJORIE CHIEW / The Star

Located in the heart of Japan and within Seto Inland Sea National Park, the 148ha site is surrounded by eight mountains, which form the shape of a lotus flower with eight petals.

Legend has it that the site was once known as Mamushi-dani (Valley of Vipers).

According to Shinku Miyagawa, high priest of the sect, Enshinjoh had a dream one night. He dreamt of slithering vipers all over the ground at the first light of dawn. The king snake, all coiled up, suddenly raised its head and bowed. It spoke to him: “We welcome you. For a very long time, we’ve waited for this day to come. To you, we’re willing to transfer this land that we’ve protected with our lives. Please use this land. We give our word to protect it at all times.”

Then the army of vipers faded away. Enshinjoh was alone in the vast land, surrounded by lush greenery and bright lights.

“The symbol of protection in Buddhism is the cobra, the king of snakes. In Japan, it is symbolised by the viper,” said Miyagawa.

When the dream recurred, Dr Enshinjoh was convinced that it was the only site worthy of constructing a spiritual centre for Buddhism in the world.

The Royal Grand Hall of Buddhism in Hyogo Perfecture, Japan, which claims to be the largest Buddhist temple edifice in the world, seems to be going for record-breaking feats.

The pair of huge stone lanterns (12m in height) in front of the Main Hall, made their way into the Guinness World Records as the largest stone lanterns. The temple also has the largest onigawara (ridge-end tile) stretching 9m in height and 8.8m wide, installed on the roof-top of the main temple building.

At 51.5m in height (equivalent to an 18-storey building), the Royal Grand Hall of Buddhism is the largest temple in Japan.

The front gate (11.4m high and 28.2m wide) is flanked by statues of Vaisravana and Virudhaka, two of the four heavenly kings in Buddhism.

The 141m-long Tathata Bridge over Moonlight Pond leads visitors to the main gate (35.6m high and 34.5m wide), the entrance to Pure Land.

A pair of guardian deities on either side of the gate urge people to do good and refrain from evil. The lacquered statues are the largest of their kind in the world. The one on the right has its mouth open, symbolising un (breathing in), while the other has its mouth closed, symbolising ah (breathing out).

Along the ascending pathway leading to the Main Hall, and nestled among beautifully landscaped gardens, is the Prince Shotoku Hall, said to be the biggest octagonal shrine in Japan.

Nearby is the Five-Story Pagoda, a striking 32.7m wooden structure richly painted in traditional colours.

Gilded twin dragons guard the top of the shrine. The shrine is flanked by four-storey high gigantic relief sculptures with intricate carvings of 108 bodhisattvas and 1,008 transformed Buddhas.

Outside the Main Hall are two Bell Towers, each with a grand bronze bell. The Grand Bell, the largest of its kind in the world, measures 5.5m in height and 3.3m in outer diameter, and weighs 48 tonnes. The weight of each bell is supported by 12 pillars which are 1.2m in diameter, and seven giant beams of wood aged over 1,000 years.

Outside, in the temple grounds, the extensively landscaped gardens are easily one of the most beautiful Japanese gardens in the world. The immaculately kept gardens are dotted with rare species of trees, including the 800-year-old podocarpus tree.

The Five Hundred Arhats Park is adorned by life-sized stone statues of 500 arhats (enlightened beings), each with a unique expression and pose. The park is the only one of its kind in the world.