Biei, Hokkaido (Japan) -- It feels a little unnerving to be cycling a mountain trail under the penetrating gaze of a wrathful deity. 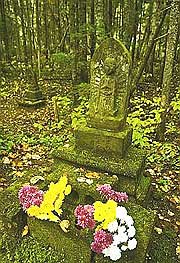 << A Bodhisattva figure on the Shirogane mountain biking trail

The god in question is Fudo Myo-o, known as “the eternal, immutable diamond” in Japanese Buddhism. He carries in his right hand a sword that is said to slash through ignorance, and in his left hand a noose to catch and bind up evil spirits.

Sounds like a thoroughly “cutting” experience. But maybe I really deserve Fudo Myo-o’s tender loving treatment, and this trip has been preordained.

On this day, I’m also in the expert hands of Australian Chuck Olbery –- who with his Japanese wife Toshie – runs Mountain Biking Hokkaido. He has promised to take me on one of his favourite trail-rides on the slopes of Mt Takachidake, in Daisetsuzan National Park.

Starting from the Shirogane Information Centre, the trail will traverse Biruke no Mori forest before veering onto the Fudo Myo-o Waterfall track, thence uphill to Shirogane-bashi Bridge — with the promise of spectacular views over the Biei River Gorge — and then downhill via another forest trail to the start.

These names are as unfamiliar to me as the trail itself. But with the autumn leaves at their most spectacular, it seems that this itinerary will guarantee not just thrills but an eye-feast beyond peer. As we set off, Chuck explains some of the features of the route.

“ ‘Biruke no Mori’ means ‘Silver Birch Forest’,” he says, as we head along a trail lined with trees bearing leaves in a hundred shades on the red-yellow spectrum. “But the native Ainu of Hokkaido used to call this place ‘The Forest of the Little People’.”

Later, I’m to hear of the Ainu koropokkuru, a pygmy that some archaeologists say really existed. Tiny “human” footprints are said to have been discovered in the rice fields of northern Japan dating from the Jomon era, around 10,000 years ago. According to some legends, the koropokkuru is a demi-god small enough to live under the leaves of the butterbur (or “dinosaur plant”), and can either help or play tricks on people according to whim.

Fortunately, the koropokkuru seems to be in a good mood this day, as I miraculously manage to stay on the bike. But more difficult tests are to come. As we enter the Shirogane Fudo Myo-o Waterfall Track, Chuck points out how to negotiate the slippery, tree-root studded trail that lies ahead.

“When you come across a tree root, try not to let the bike drift sideways”, he says. “Take it at a decent speed, and jump over the roots if you can.”

As I’m soon to learn, the Shirogane Fudo Myo-o Waterfall Track has its own special mystique, with a series of shrines or engraved stones placed at intervals of a 100m or so all along the way. The track was laid out by members of the Buddhist Shingon school from Shikoku Island, and is a mini-version of the famous “88-temples” pilgrimage trail of Shikoku.

The names of the Shikoku shrines are all written on the stones that line the Fudo Myo-o Waterfall Track — and it has to be said that the effect is mesmerising.

The “88-temples” pilgrimage trail on Shikoku Island is renowned both throughout Japan and overseas, and devoted pilgrims visit all the temple shrines on foot — a feat taking between one and two months.

Many of these temples were founded by the famous engineer-monk Kukai (a.k.a. Kobo Daishi), who introduced esoteric Buddhism to Japan over a thousand years ago.

His followers — including ex-Prime Minister Ikeda and leaders of top corporations like Sharp and National Panasonic — believe that he is still alive and living atop Mt Koya, near Osaka.

But by now, we’ve reached the super-scenic Fudo Falls, which cascade down through a russet-coloured canyon. Overlooking the waterfall, a giant statue of Fudo Myo-o keeps silent watch.

I’m told that Fudo Myo-o has the secondary role of protecting those travellers who don’t rub him up the wrong way — and that’s also the case for his companion deity the Jizo Bodhisattva, whose role is to ease the suffering and reduce the sentence of those languishing in hell. So, maybe there is hope for me yet!

At Shirogane Shrine, right at the foot of the waterfall, smaller statues of Fudo Myo-o and the Jizo Bodhisattva are adorned with fresh flowers placed by devotees. From here, the trail narrows and starts to wind uphill. All along the way, shrine stones mark the tortuously zigzagging trail.

In a tree-shaded clearing, large statues of pilgrims on the Shikoku 88-temple route make me stop and think for a rare moment. Is the destination of a trip the main purpose, or is the journey itself the main thing? On a glorious autumn day like this, it’s hard not to conclude that the destination is only secondary, and that the real purpose of the trip lies in tackling and overcoming obstacles while at the same time revelling in the sheer delight of new experiences.
Deities at the foot of Fudo-o waterfall.

Thanks to Fudo Myo-o, I manage to get to the top of the trail in one piece. At the trailhead, the Shirogane-bashi Bridge offers spectacular views over the Biei River Gorge and the 30m high multi-streamed Shirohige-no-Taki Waterfall. The vivid cobalt blue of the river and the golden-orange autumn leaves together make a picture that could have leapt straight off a painter’s easel.

And then it’s all downhill, along another exhilarating trail back to the Shirogane Info Centre, passing en route an emerald lake studded with flooded silver birch trunks.

After this, it may be time to do the whole loop all over again — but this time on foot. Slow and steady may not always win the race, but in a “race” like this there are no real losers.

The Shirogane Falls and trail are about 18km from the town of Biei, which is a short drive (say 20-30 minutes) from Hokkaido’s Asahikawa Airport.