Man collared in Mie over statue theft at Kyoto temple

KYOTO, Japan -- A Mie Prefecture resident has been arrested in connection with the theft of a statue from Kennin-ji, a Zen Buddhist temple in Kyoto, police said. 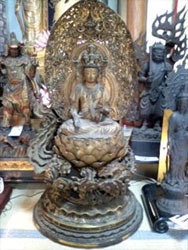 Police have arrested Itsuo Abe, 59, from Yokkaichi, Mie Prefecture, on suspicion of stealing a wooden statue of the Buddhist Goddess of Mercy from Kennin-ji, Japan's oldest known Zen Buddhist temple.

The statue itself is 70 centimeters high, weighs about 3 kilograms, and dates back to the early Edo period, when it was donated to the temple by Masako Tokugawa, a daughter of shogun Hidetada Tokugawa. It is not a designated cultural asset.

Police say that on Jan. 31, a suspicious individual was seen on security camera footage breaking into the temple and bundling the statue in a jacket. He was spotted again by a nearby parking lot camera getting into a car, and police were able to identify it as Abe's.

A number of other statues were found in Abe's home, and he is being investigated in connection with a string of similar thefts since last autumn.