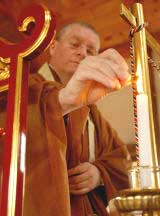 Paul Naamon, a former paramedic, was sure his new friend, Gobo (his Dharma name), was having a heart attack, and so Naamon informed an instructor that Gobo needed to see a doctor.

It's really not possible right here for an ambulance to reach us, the instructor said, noting the narrow path on the mountain they tread on the second day of training.

And so Naamon and the instructor pushed and pulled Gobo farther up the mountain. When they reached an open space where an ambulance could pick up Gobo, Naamon told the instructor: "Gobo's really having a heart attack. He could die. This is serious.

"And he looks at me and he says, 'Monshin (Naamon's Dharma name), you signed a sheet when you came here saying that there's only two ways to leave. You either complete the Gyo (training), or you leave in a box. ' He looked at me and said, 'Gobo could be having a heart attack. I think you're probably correct. I'm not doubting your word that he's having a heart attack. However, here's the choice: He could die doing this, and if he dies, what could be better than to die while doing the kaihogyo on Mount Hiei?

'If he doesn't die, think of the character he will have built, and how much better he will be as a priest.'?"

Kaihogyo (pronounced KAI-ho-gyo) is an ancient meditation that's often part of training to become a Tendai Buddhist monk (Tendai is considered the most culturally significant school of Buddhism in Japan, Naamon said). Naamon completed that kaihogyo in July 2002, and so did Gobo, though it nearly killed him and that was a one-day

Naamon is the abbot of the Tendai Buddhist Institute in East Chatham, which offers the only ordination training for Tendai Buddhist priests outside Japan. The Institute is a branch of Enryakuji, the head Tendai temple on Mount Hiei (pronounced HEE-ay).

This June, Tendai Buddhists from countries such as Denmark, England, Germany and Canada, as well as U.S. practitioners, will come to the institute, where a reconstructed red barn serves as a handsome, albeit unlikely, temple.

As part of the training for Tendai Buddhist priest candidates that Naamon offers once a year, candidates go on a one-day kaihogyo, or kororodo, as Naamon calls it. In the foothills of the Berkshires, participants walk about 18 miles along dirt back roads, among the birds, trees, rural homes and mountain vistas. They stop at designated spots to recite mantras and perform mudras (ritual hand gestures).

The majority of participants complete these kaihogyos. A few don't; they try again the following year. Then there are the Tendai marathon monks, their brethren in Japan for whom failure is not an option.

To become an abbot at Mount Hiei, near the ancient capital of Kyoto, most Tendai priests complete a 100-day kaihogyo. In these devotional acts, a monk runs and walks briskly for about 25 miles per day for 100 consecutive days along the same paths men such as Saicho, the founder of the Tendai school, once did.

These monks aren't permitted maps, so they memorize the uneven and poorly marked trails they tramp by candlelight (they wake at midnight and begin their journey at 1:30 a.m). In the first days, it's not uncommon for monks to lose the trail, which can tack on additional miles.

They don't stop to eat, drink or rest. They do stop briefly at about 255 stations of worship, where they perform mudras and recite mantras, so it typically takes a monk 6?1/2 to 7?1/2 hours to complete one day's trek.

Unlike the Tendai Buddhists in Canaan, they don't wear Nikes or Adidas. They do run in straw sandals.

And they don't quit. In keeping with tradition, they carry a dagger and a rope cord. Several monks in the 19th century who failed to complete their kaihogyo committed seppuku (suicide), to which several headstones along the path attest.

They perform the kaihogyo as a devotion to other sentient beings, not for their own benefit, said Naamon, who founded the Tendai Buddhist Institute in 1995.

At one point during their runs, the marathon monks pass through city streets, where people line up to receive blessings and to offer support.

When Naamon, 60, experienced this in a pair of one-day kaihogyos during his training on Mount Hiei, he found it incredibly moving, he said.

Jim Curry, the Hamilton County district attorney, is a practicing Tendai Buddhist. He began his own modified 100-day challenge on Feb. 14, on average completing about 10 miles per day, before and/or after work (he intends to walk 1,000 miles over the 100 days). It takes him between 3 and 3?1/2 hours.

Curry, 61, carries a knife and chord of rope but only for symbolic purposes. "I don't subscribe to that kind of thing myself," he said.

He often walks the same route from his Indian Lake home, stopping at the same sites to recite mantras, and finds it to be a spiritual, life-affirming experience.

"I'm always walking the same places I've never been before," he said.

Brian Ettkin can be reached at 454-5457 or by e-mail at bettkin@timesunion.com.

Think the 100-day kaihogyo on Mt. Hiei stretches the limits of mental and physical endurance?

It's a jog through the park compared to the 1,000-day challenge, which those who complete the 100-day kaihogyo can petition to undertake. It consists of:

52 miles per day the equivalent of two marathons for 100 consecutive days.